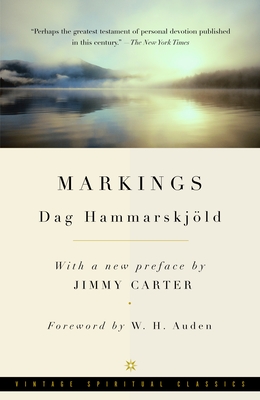 "Perhaps the greatest testament of personal devotion published in this century." — The New York Times

A powerful journal of poems and spiritual meditations recorded over several decades by a universally known and admired peacemaker. A dramatic account of spiritual struggle, Markings has inspired hundreds of thousands of readers since it was first published in 1964.

Markings is distinctive, as W.H. Auden remarks in his foreword, as a record of "the attempt by a professional man of action to unite in one life the via activa and the via contemplativa." It reflects its author's efforts to live his creed, his belief that all men are equally the children of God and that faith and love require of him a life of selfless service to others. For Hammarskjöld, "the road to holiness necessarily passes through the world of action." Markings is not only a fascinating glimpse of the mind of a great man, but also a moving spiritual classic that has left its mark on generations of readers.

Dag Hammarskjold was born in Sweden in 1905 and died in Northern Rhodesia in a plane crash in 1961, while flying there to negotiate a cease-fire between United Nations and Katanga forces. Elected Secretary-General of the United Nations in 1953, serving until his death, he was known throughout the world as a peacemaker. He had studied law and economics, but was also widely read in philosophy and literature. His internal struggles remained a private matter between him and God until after his death, when this book of meditations was published, making him posthumously one of the twentieth century's most noted spiritual pilgrims.

"The conviction when one has finished [Markings is] that one has had the privilege of being in contact with a great, good, and lovable man."—W. H. Auden

This feature require that you enable JavaScript in your browser.
END_OF_DOCUMENT_TOKEN_TO_BE_REPLACED

This feature require that you enable JavaScript in your browser.
END_OF_DOCUMENT_TOKEN_TO_BE_REPLACED

This feature require that you enable JavaScript in your browser.
END_OF_DOCUMENT_TOKEN_TO_BE_REPLACED