How I Live Now (Compact Disc) 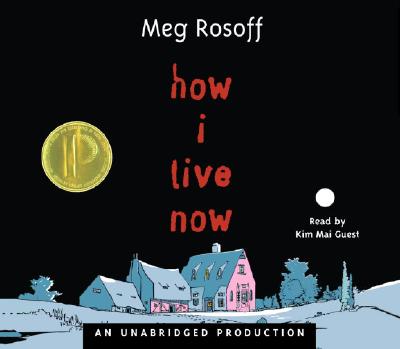 “Every war has turning points and every person too.”

Fifteen-year-old Daisy is sent from Manhattan to England to visit her aunt and cousins she’s never met: three boys near her age, and their little sister. Her aunt goes away on business soon after Daisy arrives. The next day bombs go off as London is attacked and occupied by an unnamed enemy.

As power fails, and systems fail, the farm becomes more isolated. Despite the war, it’s a kind of Eden, with no adults in charge and no rules, a place where Daisy’s uncanny bond with her cousins grows into something rare and extraordinary. But the war is everywhere, and Daisy and her cousins must lead each other into a world that is unknown in the scariest, most elemental way.

A riveting and astonishing story.

"A daring, wise, and sensitive look at the complexities of being young in a world teetering on chaos, Rosoff's poignant exploration of perseverance in the face of the unknown is a timely lesson for us all." - People Magazine

"This riveting first novel paints a frighteningly realistic picture of a world war breaking out in the 21st century . . . Readers will emerge from the rubble much shaken, a little wiser, and with perhaps a greater sense of humanity." - Publishers Weekly, Starred

“That rare, rare thing, a first novel with a sustained, magical and utterly faultless voice. After five pages, I knew she could persuade me to believe anything.” —Mark Haddon, author of The Curious Incident of the Dog in the Night-Time

“Readers will remain absorbed to the very end by this unforgettable and original story.”—The Bulletin, Starred

“A fantastic treat . . . Daisy is an unforgettable heroine.”—Kliatt, Starred

“A crunchily perfect knock-out of a debut novel.”—The Guardian (U.K.)

This feature require that you enable JavaScript in your browser.
END_OF_DOCUMENT_TOKEN_TO_BE_REPLACED

This feature require that you enable JavaScript in your browser.
END_OF_DOCUMENT_TOKEN_TO_BE_REPLACED

This feature require that you enable JavaScript in your browser.
END_OF_DOCUMENT_TOKEN_TO_BE_REPLACED