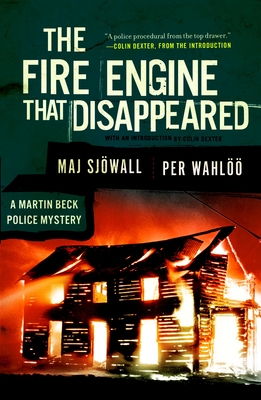 By Maj Sjowall, Per Wahloo, Colin Dexter (Introduction by)
$16.00

This is book number 5 in the Martin Beck Police Mystery Series series.

The lightning-paced fifth novel in the Martin Beck mystery series by the internationally renowned crime writing duo, Maj Sjöwall and Per Wahlöö, finds Beck investigating one of the strangest, most violent, and unforgettable crimes of his career.The incendiary device that blew the roof off a Stockholm apartment not only interrupted the small, peaceful orgy underway inside, it nearly took the lives of the building's eleven occupants. And if one of Martin Beck's colleagues hadn't been on the scene, the explosion would have led to a major catastrophe because somehow a regulation fire-truck has vanished. Was it terrorism, suicide, or simply a gas leak? And what if, anything, did the explosion have to do with the peculiar death earlier that day of a 46-year-old bachelor whose cryptic suicide note consisted of only two words: "Martin Beck"?

Maj Sjöwall and Per Wahlöö, her husband and coauthor, wrote ten Martin Beck mysteries. Mr Wahlöö, who died in 1975, was a reporter for several Swedish newspapers and magazines and wrote numerous radio and television plays, film scripts, short stories, and novels. Maj Sjöwall is also a poet.

“A police procedural from the top drawer.”—Colin Dexter, from the introduction“Superbly well done. . . . Stunning right up to the last paragraph.”—New York Magazine“The first great series of police thrillers. . . . Truly exciting.”—Michael Ondaatje“Sjöwall and Wahlöö, beside writers such as Raymond Chandler, Dashiell Hammett and Georges Simenon, have shaped the genre and the reader's expectations as to what crime fiction should be.”—Jo Nesbo

This feature require that you enable JavaScript in your browser.
END_OF_DOCUMENT_TOKEN_TO_BE_REPLACED

This feature require that you enable JavaScript in your browser.
END_OF_DOCUMENT_TOKEN_TO_BE_REPLACED

This feature require that you enable JavaScript in your browser.
END_OF_DOCUMENT_TOKEN_TO_BE_REPLACED