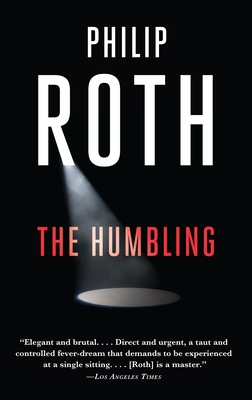 Simon Axler, one of the leading American stage actors of his generation, is now in his sixties and has lost his magic, talent, and assurance. His Falstaff and Peer Gynt and Vanya, all his great roles, “are melted into air, into thin air.” When his wife leaves him, and after a stint at a mental hospital, he retires to his upstate New York country house and hopes for deliverance, which arrives in the form of the lithe, vibrant, and ever-subversive Pegeen Stapleford, the daughter of old friends and 25 years his junior.

In this tight, surprising narrative told with Roth’s inimitable urgency, bravura, and gravity, we confront the terrifying fragility of all our life’s performances.

“Elegant and brutal. . . . Direct and urgent, a taut and controlled fever-dream that demands to be experienced at a single sitting. . . . [He] is a master.” —The Los Angeles Times

“Convincing and powerful. . . . At 76, [Roth] is still a literary colossus whose ability to inspire, astonish and enrage his readers is undiminished.” —Elaine Showalter, The Washington Post

“Philip the great, Philip the audacious, the voracious, writes of bottomless hunger—emotional, sexual, existential. When you hear about a new Philip Roth novel, you have to read it. . . . Roth still has his chops.” —O, The Oprah Magazine

“Masterful. . . . Roth's best work in years; sentence for sentence, paragraph for paragraph, he's still the most readable serious writer we've got. . . . It's pleasant to read a book this tight, this efficiently constructed.”  —The Huffington Post

“Blooms brightly in the extraordinarily fecund garden of his late work. . . . A swift but piercing, uncluttered but nuanced morality tale.” —“Books We Like,” NPR

“The Humbling unfolds in three acts of pristine economy, dramatic lucidity and unstoppable narrative momentum. . . . The dispassion that has always marked Roth’s narrative voice sometimes achieves the depth and simplicity of the best music or poetry. . . . The laughter keeps getting quieter and more knowing.” —The Plain Dealer

“The novel . . . finds traction in familiar Rothian interrogations—of the self’s deviousness, the impossible murkiness of motive, and the performative nature of identity.” —The New Yorker

“Roth is a master of pacing. . . . [He is] a great writer, a great anatomist of passion. His admirers will find much to admire in The Humbling.” —The Oregonian

“Succinct and attention-grabbing. . . . Though the novels are shorter these days, they are no less provocative than his early ones.” —Winnipeg Free Press

“The Humbling should be read as a kind of Mortality Trilogy with The Dying Animal and Everyman, two other autumnal works from this great writer. Short, bitter and bracing, they lend the courage to see and endure what is.” —The Dallas Morning News

“Roth writes movingly. . . . The compact intensity of Roth’s late fictions suits well the stark truths he explores in The Humbling. Here, he strips a man’s life to its essential movements, onto the light of the stage and off to the darkness of the wings when the curtains come down.” —The Post and Courier

“At 76 [Roth] is still leaving scorch marks on the page.” —Bloomberg News

“Compelling. . . . It takes an artist as gravely ludicrous as Roth to create a body of work in which intertextuality comes to be a brute condition of existence itself.”  —The Times Literary Supplement [UK]

“Masterly. . . . Powerfully dramatic. . . . We should be grateful that Roth continues to maintain his concentration on the terrible facts. . . . [The Humbling] is the most to-the-point, the most necessary work its author has published since The Dying Animal.” —London Review of Books

“Gripping. . . . The intense realism of some of the scenes is shocking and unforgettable. . . . Worthy of a David Lynch film. . . . [Roth] is the most courageous writer alive, and this is another brave move.” —The Guardian [UK]

This feature require that you enable JavaScript in your browser.
END_OF_DOCUMENT_TOKEN_TO_BE_REPLACED

This feature require that you enable JavaScript in your browser.
END_OF_DOCUMENT_TOKEN_TO_BE_REPLACED

This feature require that you enable JavaScript in your browser.
END_OF_DOCUMENT_TOKEN_TO_BE_REPLACED