Screening Room: A Memoir of the South (Paperback) 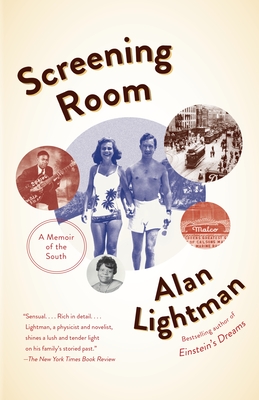 Alan Lightman’s grandfather M.A. was the family’s undisputed patriarch. It was his movie theater empire that catapulted the Lightmans, a Hungarian Jewish immigrant family, to prominence in the South; his triumphs that would both galvanize and paralyze his descendants. In this evocative personal history, the author chronicles his return to Memphis and the stifling home he had been so eager to flee forty years earlier. As aging uncles and aunts retell old stories, Alan finds himself reconsidering long-held beliefs about his larger-than-life grandfather and his quiet, inscrutable father.

The result is an unforgettable family saga set against the pulsing backdrop of Memphis—its country clubs and juke joints, its rhythm and blues, its segregated movie theaters, its barbecue and pecan pie—including encounters with Elvis, Martin Luther King Jr., and E. H. “Boss” Crump. Both intensely personal and quintessentially American, Screening Room finely explores the tricks of light that can make—and unmake—a man and his myth.

(With black-and-white illustrations throughout.)

“This brilliantly observed and poignantly written memoir . . . is about what really defines the South—the real common denominator in our contested little matrix of blacks and whites, Jews and gentiles: family.” —The Washington Post

“Sensual. . . . Rich in detail. . . . Lightman, a physicist and novelist, shines a lush and tender light on his family’s storied past.” —The New York Times Book Review

“Raises goose-pimples of readerly delight. . . . Lightman bends his nostalgia through the prism of a writer’s creativity the way light through a projector blooms into a story on the screen.” —The Boston Globe

“A celebration of life’s possibilities and the way we remember them.” —Los Angeles Review of Books

“Screening Room features the usual graceful prose and style of Lightman as he recalls the Memphis of his youth and compares it to the city in modern times. . . . The stories he tells and characters he describes paint a vivid portrait of his family’s life.” —Saint Louis Post-Dispatch

“Written in the elegant, precise style that makes Lightman’s novels so pleasurable to read, and the compelling concerns of his fiction—the slipperiness of memory, perception, and time, and the mystery at the heart of existence—are at the center of this book, as well. In Lightman's hands, this story of a family becomes a meditation on the fleeting nature of our lives and the precious flashes of love and communion that illuminate them.” —Knoxville News Sentinel

“The physicist . . . returns to Memphis after a death in the family to ponder a Southern boyhood as rich and complex as science itself.” —O Magazine

“The Lightman family’s rise to prominence is an exceptional one; a Jewish tale of resilience and daring and imagination.” —Jewish Journal

“The cumulative effect of Lightman’s memories is wrenching: loss and illness and death wander freely in his pages, reminding us of the evanescence of youth and promise. The author shows us many small moments, igniting each with sparks of passion, memory and intelligence.” —Kirkus Reviews

This feature require that you enable JavaScript in your browser.
END_OF_DOCUMENT_TOKEN_TO_BE_REPLACED

This feature require that you enable JavaScript in your browser.
END_OF_DOCUMENT_TOKEN_TO_BE_REPLACED

This feature require that you enable JavaScript in your browser.
END_OF_DOCUMENT_TOKEN_TO_BE_REPLACED