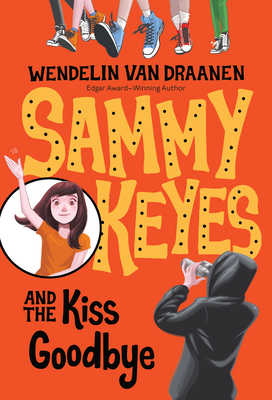 This is book number 18 in the Sammy Keyes series.

Sammy doesn’t go looking for trouble, but she seems to find it everywhere. She’s forever sniffing out clues and chasing down bad guys—and driving her friends a little nuts. She’s gone up against thieves and counterfeiters and gangsters and blackmailers and murderers, and always stayed one step ahead.

Last night, one of the bad guys caught up.

Last night, someone followed Sammy up the fire escape and pushed her from the third story.

Now she’s in the hospital, out cold. And her friends are left with the questions Sammy’s always been so good at answering: Why? How? But most of all . . . WHO?

In this emotional conclusion to her beloved long-running series, Wendelin Van Draanen shows just how many lives one nosy girl can touch and pays tribute to a life well sleuthed.

Praise for Sammy Keyes:
“If Kinsey Millhone ever hires a junior partner, Sammy Keyes will be the first candidate on the list. She’s feisty, fearless, and funny. A top-notch investigator!” —Sue Grafton

“Sammy’s brave, resourceful, observant and a loyal friend, but this girl sleuth is no well-mannered Nancy Drew. She’s endearingly hot-tempered, nosy, and not always obedient—in short, she’s someone I want to read about again.” —Margaret Maron

This feature require that you enable JavaScript in your browser.
END_OF_DOCUMENT_TOKEN_TO_BE_REPLACED

This feature require that you enable JavaScript in your browser.
END_OF_DOCUMENT_TOKEN_TO_BE_REPLACED

This feature require that you enable JavaScript in your browser.
END_OF_DOCUMENT_TOKEN_TO_BE_REPLACED