On Celtic Tides: One Man's Journey Around Ireland by Sea Kayak (Paperback) 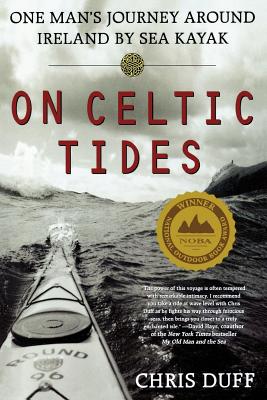 A sea kayak battles the freezing Irish waters as the morning sun rises out of the countryside. On the western horizon is the pinnacle of Skellig Michael-700 feet of vertical rock rising out of exploding seas. Somewhere on the isolated island are sixth-century monastic ruins where the light of civilization was kept burning during the Dark Ages by early Christian Irish monks. Puffins surface a few yards from the boat, as hundreds of gannets wheel overhead on six foot wing spans. The ocean rises violently and tosses paddler and boat as if they were discarded flotsam. This is just one day of Chris Duff's incredible three month journey.

Chris Duff has traveled over 14,000 miles by sea kayak since 1983 when he paddled 8,000 miles around the eastern third of the United States and Canada. In 1986 he became the first person to solo the entire British Isles and is currently planning a solo circumnavigation of New Zealand's south island. Chris is a contributing author to the book Seekers of the Horizon and has written for Sea Kayaker magazine and the International Sea Kayaking Association. He lectures across the country and lives in Port Angeles, Washington.

This feature require that you enable JavaScript in your browser.
END_OF_DOCUMENT_TOKEN_TO_BE_REPLACED

This feature require that you enable JavaScript in your browser.
END_OF_DOCUMENT_TOKEN_TO_BE_REPLACED

This feature require that you enable JavaScript in your browser.
END_OF_DOCUMENT_TOKEN_TO_BE_REPLACED