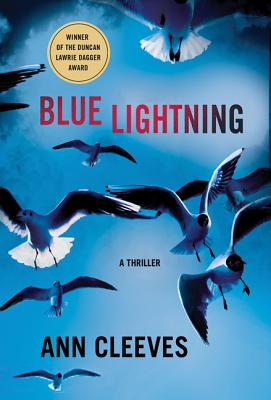 This is book number 4 in the Shetland Island Mysteries series.

Blue Lightning is the fourth in a stellar suspense series from Ann Cleeves set on the Shetland Islands, the basis for the hit BBC show Shetland, starring Douglas Henshall.

Inspector Jimmy Perez takes his fiancé home to Fair Isle, the tiny island he comes from, to meet his parents. The island is a magnet for bird watchers, who congregate at the local inn and lighthouse. When a local married celebrity, who had an eye for the lads, is murdered, Perez discovers that the suspects are very close to him indeed. With a sensational ending destined to create much buzz in the mystery world, Blue Lightning will thrill suspense fans everywhere.

ANN CLEEVES is the multi-million copy bestselling author behind three hit television series—Shetland, starring Douglas Henshall, Vera, starring Academy Award Nominee Brenda Blethyn, and The Long Call, starring Ben Aldridge—all of which are watched and loved in the United States. All three are available on BritBox.

The first Shetland novel, Raven Black, won the Crime Writers' Association Gold Dagger for best crime novel, and Ann was awarded the CWA Diamond Dagger in 2017. She was awarded the OBE in 2022 for services to reading and libraries. Ann lives in the United Kingdom.

“Blue Lightning is nothing short of riveting.” —Louise Penny

“Chilling...enough to freeze the blood.” —The New York Times on Raven Black

“Cunning… Pulls the wool over our eyes in true Christie fashion.” —Colin Dexter, author of the Inspector Morse mysteries, on White Nights

This feature require that you enable JavaScript in your browser.
END_OF_DOCUMENT_TOKEN_TO_BE_REPLACED

This feature require that you enable JavaScript in your browser.
END_OF_DOCUMENT_TOKEN_TO_BE_REPLACED

This feature require that you enable JavaScript in your browser.
END_OF_DOCUMENT_TOKEN_TO_BE_REPLACED