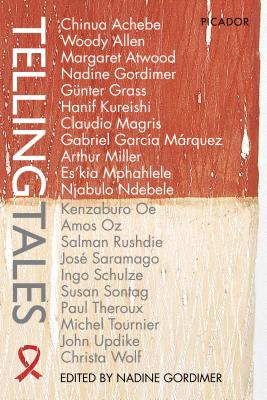 An extraordinary story collection selected by Nobel Prize winner Nadine Gordimer, from which all proceeds will be donated to the fight against AIDS

Rarely have writers of such variety and distinction appeared together in the same anthology. Their stories capture the range of emotions and situations of our human universe: tragedy, comedy, fantasy, satire, dramas of sexual love and of war in different continents and cultures. They are not about HIV / AIDS. But all twenty-one writers have given their stories--chosen by themselves as representing some of the best of their lifetime work as storytellers--without any fee or royalty. This collection includes five Nobel Prize winners: Nadine Gordimer, Gabriel Garcia Marquez, Jose Saramago, Kenzaburo Oe, and Gunter Grass; along with other world-class writers such as Arthur Miller, Salman Rushdie, Margaret Attwood, Chinua Achebe, and Susan Sontag.

Telling Tales is being published in more than twelve countries. The publisher's profits from the sales of this book will go to HIV / AIDS preventive education and for medical treatment for people living with the suffering this pandemic infection brings to our contemporary world. So when you buy this unique anthology of renowned storytellers as a gift or for your own reading pleasure, you are also making a gift to combat the plague of our new millennium.

Ms. Gordimer was a vice president of PEN International and an executive member of the Congress of South African Writers. She was a fellow of the Royal Society of Literature in Great Britain and an honorary member of both the American Academy of Arts and Letters and the American Academy of Arts and Sciences. She was also a Commandeur de'Ordre des Arts et des Lettres (France). She held fourteen honorary degrees from universities including Harvard, Yale, Smith College, the New School for Social Research, City College of New York, the University of Leuven in Belgium, Oxford University, and Cambridge University.

Ms. Gordimer won numerous literary awards, including the Booker Prize for The Conservationist, both internationally and in South Africa.

“The 21 stellar writers in this international short-story collection include five Nobel winners.... 'The Ultimate Safari,' by Gordimer, who edited the anthology, is a searing, unforgettable account of a desperate refugee child hiding from the fancy tourists in a famous game park.” —Booklist

“A stellar roster, including five Nobelists--Gordimer, Grass, Oe, Marquez, and Saramago--offers 21 stories in a fundraising effort for HIV and AIDS in southern Africa.... a variety of voices with important stories.” —Kirkus Reviews

This feature require that you enable JavaScript in your browser.
END_OF_DOCUMENT_TOKEN_TO_BE_REPLACED

This feature require that you enable JavaScript in your browser.
END_OF_DOCUMENT_TOKEN_TO_BE_REPLACED

This feature require that you enable JavaScript in your browser.
END_OF_DOCUMENT_TOKEN_TO_BE_REPLACED