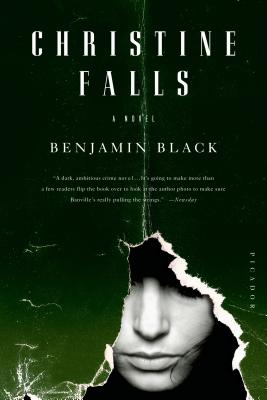 This is book number 1 in the Quirke series.

Set in 1950s Dublin, Christine Falls is the first of a series featuring the hard drinking, rather depressive pathologist, Quirke.  Curious about the details of a suspicious death, he obsessively traces the victim’s circumstances that turn out to involve his own family.

So besides a compelling whodunnit, we discover Quirke’s backstory along with family complications, reaching across the pond to Catholic Boston where some of the action takes place.  By Booker Prize winner John Banville under his pseudonym, the writing is exceptional for the mystery genre.

The hero of Christine Falls, Quirke, is a surly pathologist living in 1950s Dublin. One night, after having a few drinks at a party, he returns to the morgue to find his brother-in-law tampering with the records on a young woman's corpse. The next morning, when his hangover has worn off, Quirke reluctantly begins looking into the woman's history. He discovers a plot that spans two continents, implicates the Catholic Church, and may just involve members of his own family. He is warned--first subtly, then with violence--to lay off, but Quirke is a stubborn man. The first novel in the Quirke series brings all the vividness and psychological insight of John Banville's writing to the dark, menacing atmosphere of a first-class thriller.

“Measured, taut, and transfixing . . . Benjamin Black's plotting is methodical, detailed, and always gripping. You can smell the smoke in Quirke's favorite pub and touch the cool walls in a Boston convent he later visits.” —USA Today

“Swirling, elegant noir . . . Crossover fiction of a very high order . . . Rolls forward with haunting, sultry exoticism . . . toward the best kind of denouement under these circumstances: a half inconclusive one.” —The New York Times

“Offers a subtler, deeper satisfaction than just finding out whodunit. . . . What's most disconcerting of all about Christine Falls is the atmosphere of moral claustrophobia enveloping it.” —The Philadelphia Inquirer

“A dark, ambitious crime novel . . . It's going to make more than a few readers flip the book over to look at the author photo to make sure Banville's really pulling the strings.” —Newsday

“Crime fiction rarely lives up to the term 'literary,' but [Christine Falls] is the happy exception.” —Entertainment Weekly

This feature require that you enable JavaScript in your browser.
END_OF_DOCUMENT_TOKEN_TO_BE_REPLACED

This feature require that you enable JavaScript in your browser.
END_OF_DOCUMENT_TOKEN_TO_BE_REPLACED

This feature require that you enable JavaScript in your browser.
END_OF_DOCUMENT_TOKEN_TO_BE_REPLACED