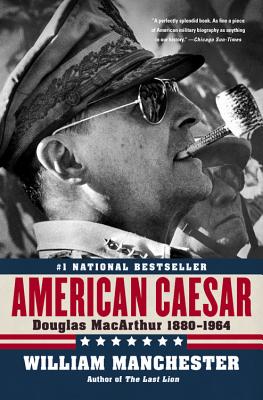 The bestselling classic that indelibly captures the life and times of one of the most brilliant and controversial military figures of the twentieth century.
"Electric...Tense with the feeling that this is the authentic MacArthur...Splendid reading." -- New York Times
Inspiring, outrageous... A thundering paradox of a man. Douglas MacArthur, one of only five men in history to have achieved the rank of General of the United States Army. He served in World Wars I, II, and the Korean War, and is famous for stating that "in war, there is no substitute for victory."
American Caesar examines the exemplary army career, the stunning successes (and lapses) on the battlefield, and the turbulent private life of the soldier-hero whose mystery and appeal created a uniquely American legend.

William Manchester was a hugely successful popular historian and biographer whose books include The Last Lion, Volumes 1 and 2, Goodbye Darkness, A World Lit Only by Fire, The Glory and the Dream, The Arms of Krupp, American Caesar, The Death of the President, and assorted works of journalism.

This feature require that you enable JavaScript in your browser.
END_OF_DOCUMENT_TOKEN_TO_BE_REPLACED

This feature require that you enable JavaScript in your browser.
END_OF_DOCUMENT_TOKEN_TO_BE_REPLACED

This feature require that you enable JavaScript in your browser.
END_OF_DOCUMENT_TOKEN_TO_BE_REPLACED