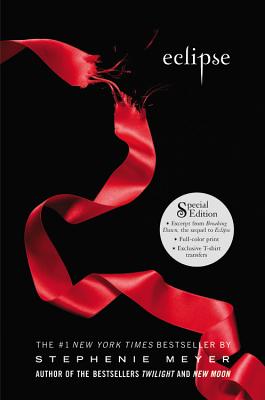 In the dead silence, all the details suddenly fell into place for me with a burst of intuition. Something Edward didn't want me to know. Something that Jacob wouldn't have kept from me...It was never going to end, was it?

Give in to temptation...

Stephenie Meyer graduated from Brigham Young University with a degree in English Literature, and she lives with her husband and three young sons in Arizona. Stephenie is the author of Twilight and New Moon.

"Has a hypnotic quality that puts the reader right inside the dense, rainy thickets of [Forks]" - People Magazine


"Meyer's trilogy seethes with the archetypal tumult of star-crossed passions, in which the supernatural element serves as a heady spice." - The New York Times

Praise for New Moon:
-"Teens will relish this new adventure and hunger for more."--Booklist
-"[A] near-genius balance of breathtaking romance and action."--VOYA
-"New Moon will ... leave [fans] breathless for the third."--School Library Journal

This feature require that you enable JavaScript in your browser.
END_OF_DOCUMENT_TOKEN_TO_BE_REPLACED

This feature require that you enable JavaScript in your browser.
END_OF_DOCUMENT_TOKEN_TO_BE_REPLACED

This feature require that you enable JavaScript in your browser.
END_OF_DOCUMENT_TOKEN_TO_BE_REPLACED