The Outpost: An Untold Story of American Valor (Hardcover) 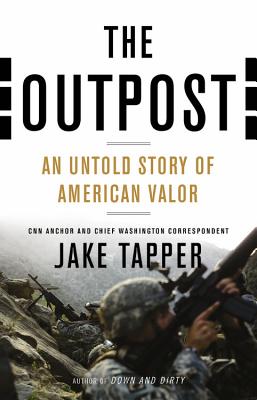 The basis of the 2020 film starring Orlando Bloom and Scott Eastwood, The Outpost is the heartbreaking and inspiring story of one of America's deadliest battles during the war in Afghanistan, acclaimed by critics everywhere as a classic.
At 5:58 AM on October 3rd, 2009, Combat Outpost Keating, located in frighteningly vulnerable terrain in Afghanistan just 14 miles from the Pakistani border, was viciously attacked. Though the 53 Americans there prevailed against nearly 400 Taliban fighters, their casualties made it the deadliest fight of the war for the U.S. that year. Four months after the battle, a Pentagon review revealed that there was no reason for the troops at Keating to have been there in the first place.

In The Outpost, Jake Tapper gives us the powerful saga of COP Keating, from its establishment to eventual destruction, introducing us to an unforgettable cast of soldiers and their families, and to a place and war that has remained profoundly distant to most Americans. A runaway bestseller, it makes a savage war real, and American courage manifest.
"The Outpost is a mind-boggling, all-too-true story of heroism, hubris, failed strategy, and heartbreaking sacrifice. If you want to understand how the war in Afghanistan went off the rails, you need to read this book." --Jon Krakauer

"There have been many books written on the subject of America's seemingly endless engagement in Afghanistan, but none better than The Outpost."—Jeffrey Goldberg, The Atlantic

"Brilliant, dedicated reporting by a journalist who goes to ground to get the truth. A sad, real tale about this war, America and the brave warriors who live-and die-at the point of the spear."
—Bob Woodward, author of PLAN OF ATTACK, THE COMMANDERS and OBAMA'S WARS

"Analyzing the consequences of decisions, large and small, is what makes Tapper's book so important...for those wishing to understand the middle years of the war, they could do no better than to read THE OUTPOST."
—Nate Rawlings, Time

"Jake Tapper has written perhaps the best book set in Afghanistan to date...He provides a window into the false hopes and visions that enabled this failed experiment, an attempt to create government in spaces that had actively avoided such."
—Douglas Ollivant, Foreign Policy

"[Jake Tapper] has woven an intricate account about battlefield bravery hamstrung by military bureaucracy...[his] voice is understated, not polemical-just a good reporter letting the facts speak for themselves."
—Tony Perry, Los Angeles Times

"[A] fascinating history...Tapper delivers a blow by blow account of [the soldier's] actions, their personal stories, and the tortured, often incomprehensible command decisions that kept them fighting despite inadequate support and an ally, Pakistan, that actively encouraged the enemy."
—Publishers Weekly

"One of the most important [books] of the year. Jake Tapper's book is meticulously researched, excellently written and a must-read for everyone who does more than just mouth the phrase, 'I support the troops.' "
—Curt Schleier, Minneapolis Star-Tribune

"The seminal work of documentary journalism to emerge out of the post-9/11 war in Afghanistan."
—Anand Sankar, Business Standard

"THE OUTPOST is valuable because its faithful account of bravery, stupidity, and inertia makes the objective case for admiration and outrage."
—Sam Jacobson, Commentary

"A heartbreaking chronicle of the rotation of soldiers asked to oversee an underfunded, often thankless mission."
—Sam Stein, Huffington Post

"As Rudyard Kipling did in the nineteenth century, now, in his magnificent book, Jake Tapper takes us to an untamed part of Afghanistan at war. Journey to THE OUTPOST to understand what our troops go through-and why they go through it."
—James Bradley, author of FLAGS OF OUR FATHERS, FLYBOYS and THE IMPERIAL CRUISE

"This is a narrative, not a polemic, and Tapper patiently lays out the history of what happened at Keating in a gripping, forceful style...[T]his unadorned, powerful accountchallenges the purposes and wisdom of America's ongoing military presence [in Afghanistan]...A timely indictment of a thoughtless waste of young American lives."—Kirkus Reviews

"[An] incredible account of how this outpost was horribly jeopardized."
—Booklist

"The Army uses the term 'BLUF' - bottom line up front. The BLUF on Jake Tapper's new book on Afghanistan, THE OUTPOST, is that you need to read it."
—Kurt Schlichter, breitbart.com

"A heartbreaking, detailed day-to-day account ... Tapper does what all great narrators do: He brings to life the individual men in a way that allows readers to see each soldier in full, with their unique backgrounds, hopes, dreams and families."
—Susan Gardner, dailykos.com

"A chronicle of the commitment and heroism of individual soldiers. As such, it can rarely have been surpassed in the history of military writing."
—John Hinderaker, powerlineblog.com

"Tapper always finds just the right personality traits and stories about [the troops'] backgrounds, allowing readers to respect them and relate to them...The Outpost is an alternately exhilarating, heartbreaking and maddening book. But ultimately...it's a testament to the fact that the brave men and women who serve and sacrifice for the United States deserve our appreciation."—Tony Rossi, Patheos.com

"What is evident in THE OUTPOST is the sacrifice made by dozens of men who answered the call of their country."
—Erica Blake, Toledo Blade

This feature require that you enable JavaScript in your browser.
END_OF_DOCUMENT_TOKEN_TO_BE_REPLACED

This feature require that you enable JavaScript in your browser.
END_OF_DOCUMENT_TOKEN_TO_BE_REPLACED

This feature require that you enable JavaScript in your browser.
END_OF_DOCUMENT_TOKEN_TO_BE_REPLACED