The Proud Tower: A Portrait of the World Before the War, 1890-1914; Barbara W. Tuchman's Great War Series (Paperback) 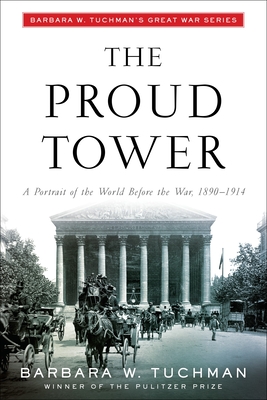 The classic account of the lead-up to World War I, told with “a rare combination of impeccable scholarship and literary polish” (The New York Times)—from the Pulitzer Prize–winning author of The Guns of August

During the fateful quarter century leading up to World War I, the climax of a century of rapid, unprecedented change, a privileged few enjoyed Olympian luxury as the underclass was “heaving in its pain, its power, and its hate.” In The Proud Tower, Barbara W. Tuchman brings the era to vivid life: the decline of the Edwardian aristocracy; the Anarchists of Europe and America; Germany and its self-depicted hero, Richard Strauss; Diaghilev’s Russian ballet and Stravinsky’s music; the Dreyfus Affair; the Peace Conferences in The Hague; and the enthusiasm and tragedy of Socialism, epitomized by the assassination of Jean Jaurès on the night the Great War began and an epoch came to a close.

The Proud Tower, The Guns of August, and The Zimmermann Telegram comprise Barbara W. Tuchman’s classic histories of the First World War era.

Barbara W. Tuchman (1912–1989) achieved prominence as a historian with The Zimmermann Telegram and international fame with The Guns of August—a huge bestseller and winner of the Pulitzer Prize. Her other works include Bible and Sword, The Proud Tower, Stilwell and the American Experience in China (for which Tuchman was awarded a second Pulitzer Prize), Notes from China, A Distant Mirror, Practicing History, The March of Folly, and The First Salute.

“[Barbara W. Tuchman’s] Pulitzer Prize–winning The Guns of August was an expert evocation of the first spasm of the 1914–1918 war. She brings the same narrative gifts and panoramic camera eye to her portrait of the antebellum world.”—Newsweek

“A rare combination of impeccable scholarship and literary polish . . . It would be impossible to read The Proud Tower without pleasure and admiration.”—The New York Times

“An exquisitely written and thoroughly engrossing work . . . The author’s knowledge and skill are so impressive that they whet the appetite for more.”—Chicago Tribune

“[Tuchman] tells her story with cool wit and warm understanding.”—Time

This feature require that you enable JavaScript in your browser.
END_OF_DOCUMENT_TOKEN_TO_BE_REPLACED

This feature require that you enable JavaScript in your browser.
END_OF_DOCUMENT_TOKEN_TO_BE_REPLACED

This feature require that you enable JavaScript in your browser.
END_OF_DOCUMENT_TOKEN_TO_BE_REPLACED