We Were Soldiers Once...and Young: Ia Drang - The Battle That Changed the War in Vietnam (Mass Market) 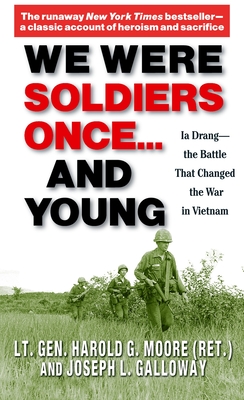 Each year, the Commandant of the U.S. Marine Corps selects one book that he believes is both relevant and timeless for reading by all Marines. The Commandant's choice for 1993 was We Were Soldiers Once . . . and Young.
In November 1965, some 450 men of the 1st Battalion, 7th Cavalry, under the command of Lt. Col. Hal Moore, were dropped by helicopter into a small clearing in the Ia Drang Valley. They were immediately surrounded by 2,000 North Vietnamese soldiers. Three days later, only two and a half miles away, a sister battalion was chopped to pieces. Together, these actions at the landing zones X-Ray and Albany constituted one of the most savage and significant battles of the Vietnam War.
How these men persevered--sacrificed themselves for their comrades and never gave up--makes a vivid portrait of war at its most inspiring and devastating. General Moore and Joseph Galloway, the only journalist on the ground throughout the fighting, have interviewed hundreds of men who fought there, including the North Vietnamese commanders. This devastating account rises above the specific ordeal it chronicles to present a picture of men facing the ultimate challenge, dealing with it in ways they would have found unimaginable only a few hours earlier. It reveals to us, as rarely before, man's most heroic and horrendous endeavor.

Harold G. Moore was born in Kentucky and is a West Point graduate, a master parachutist, and an Army aviator. He commanded two infantry companies in the Korean War and was a battalion and brigade commander in Vietnam. He retired from the Army in 1977 with thirty-two years' service and then was executive vice president of a Colorado ski resort for four years before founding a computer software company. An avid outdoorsman, Moore and his wife, Julie, divide their time between homes in Auburn, Alabama, and Crested Butte, Colorado.
Joseph L. Galloway is a native Texan. At seventeen he was a reporter on a daily newspaper, at nineteen a bureau chief for United Press International. He spent fifteen years as a foreign and war correspondent based in Japan, Vietnam, Indonesia, India, Singapore, and the Soviet Union. Now a senior writer with U.S. News & World Report, he covered the Gulf War and coauthored Triumph Without Victory: The Unreported History of the Persian Gulf War. Galloway lives with his wife, Theresa, and sons, Lee and Joshua, on a farm in northern Virginia.

“A GUT-WRENCHING ACCOUNT OF WHAT WAR IS REALLY ALL ABOUT, which should be ‘must’ reading for all Americans, especially those who have been led to believe that war is some kind of Nintendo game.”
–GENERAL H. NORMAN SCHWARZKOPF

“Hal Moore and Joe Galloway have captured the terror and exhilaration, the comradeship and self-sacrifice, the brutality and compassion that are the dark heart of war.”
–NEIL SHEEHAN, author of A Bright Shining Lie

“A powerful and epic story . . . This is the best account of infantry combat I have ever read, and the most significant book to come out of the Vietnam War.”
–COLONEL DAVID HACKWORTH, author of the bestseller About Face

This feature require that you enable JavaScript in your browser.
END_OF_DOCUMENT_TOKEN_TO_BE_REPLACED

This feature require that you enable JavaScript in your browser.
END_OF_DOCUMENT_TOKEN_TO_BE_REPLACED

This feature require that you enable JavaScript in your browser.
END_OF_DOCUMENT_TOKEN_TO_BE_REPLACED