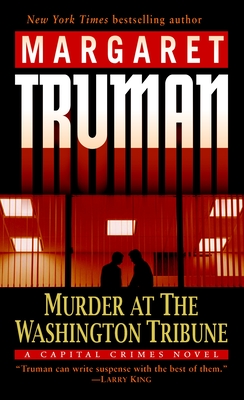 This is book number 21 in the Capital Crimes series.

“Truman can write suspense with the best of them.”
–Larry King

“Satisfying . . . [a] solid mystery . . . a cautionary tale about ambition and a vote for journalistic integrity.”
–Publishers Weekly

At the big, aggressive Washington Tribune, a young woman, fresh out of journalism school, has been brutally strangled to death–and the hunt for her killer is making sensational headlines. Then a second woman is found dead. She, too, worked in the media. For veteran Trib reporter Joe Wilcox, the case strikes too close to home: His daughter is a beautiful rising TV news star. Seeing a chance to revive his free-falling career, Joe spearheads the Trib’s investigation and baits a trap for the murderer with a secret from his own past. Suddenly Joe is risking his career, his marriage, and even his daughter’s life by playing a dangerous game with a possible serial killer . . . one who hides in plain sight.

“Ripe with suspense, Truman’s mystery gets edgier with each page. . . . A captivating, fast-paced thriller.”
–Romantic Times

Margaret Truman won faithful readers with her works of biography and fiction, particularly her ongoing series of Capital Crimes mysteries. Her novels let us into the corridors of power and privilege, and poverty and pageantry, in the nation’s capital. She was the author of many nonfiction books, including The President’s House, in which she shares some of the secrets and history of the White House where she once resided. Truman lived in Manhattan and passed away in 2008.

This feature require that you enable JavaScript in your browser.
END_OF_DOCUMENT_TOKEN_TO_BE_REPLACED

This feature require that you enable JavaScript in your browser.
END_OF_DOCUMENT_TOKEN_TO_BE_REPLACED

This feature require that you enable JavaScript in your browser.
END_OF_DOCUMENT_TOKEN_TO_BE_REPLACED