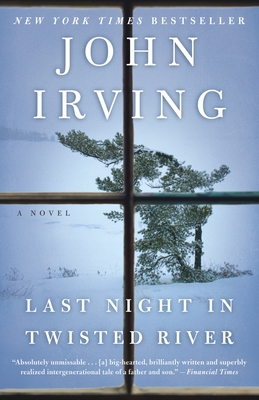 Different story---same John Irving, a master storyteller with a quirky tale of lumbering in northern New Hampshire with characters so peculiar and allluring that I will remember them forever. There is an autobiographical element in this book and, yes, a bear. This is a return to the Irving of old---I had all but given up on him, but this story takes you on such an incredible journey in time, place, and substance that you will shirk work and postpone play to keep reading. If Ketchum doesn't make your heart sing, you should see a cardiologist.

In 1954, in the cookhouse of a logging and sawmill settlement in northern New Hampshire, an anxious twelve-year-old boy mistakes the local constable’s girlfriend for a bear. Both the twelve-year-old and his father become fugitives, forced to run from Coos County—to Boston, to southern Vermont, to Toronto—pursued by the implacable constable. Their lone protector is a fiercely libertarian logger, once a river driver, who befriends them. In a story spanning five decades, Last Night in Twisted River depicts the recent half-century in the United States as “a living replica of Coos County, where lethal hatreds were generally permitted to run their course.” What further distinguishes Last Night in Twisted River is the author’s unmistakable voice—the inimitable voice of an accomplished storyteller.

John Irving has been nominated for a National Book Award three times—winning once, in 1980, for the novel The World According to Garp. In 1992, Mr. Irving was inducted into the National Wrestling Hall of Fame in Stillwater, Oklahoma. In 2000, he won the Oscar for Best Adapted Screenplay for The Cider House Rules—a film with seven Academy Award nominations.

This feature require that you enable JavaScript in your browser.
END_OF_DOCUMENT_TOKEN_TO_BE_REPLACED

This feature require that you enable JavaScript in your browser.
END_OF_DOCUMENT_TOKEN_TO_BE_REPLACED

This feature require that you enable JavaScript in your browser.
END_OF_DOCUMENT_TOKEN_TO_BE_REPLACED