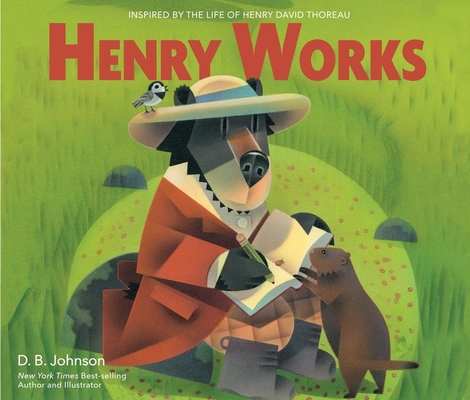 Henry’s friends learn that you can work hard and love what you do in this installment of the New York Times best-selling series inspired by the life of Henry David Thoreau.

Does it still count as hard work if you are also having fun?

Without Henry the bear, inspired by Henry David Thoreau, wildflowers would go unwatered, rivers would have no crossing stones, and storms would come without warning. His friends try to convince him that he’s not “doing anything,” but Henry finds his work more rewarding than getting paid. Henry Works flows through morning’s mist to evening’s glow, when Henry’s most important work is revealed!

A celebration of nature and hard work that comes in many shapes and sizes.

D. B. Johnson has been a freelance illustrator for more than twenty years and has done editorial cartoons, comic strips, and conceptual illustrations for magazines and newspapers around the country. Mr. Johnson’s first picture book, Henry Hikes to Fitchburg, was a New York Times bestseller and a Publishers Weekly bestseller, as well as an American Bookseller “Pick of the Lists.” Henry Hikes to Fitchburg also won numerous awards, including the Boston Globe–Horn Book Award for Picture Books and the Ezra Jack Keats New Writer Award. Mr. Johnson lives in New Hampshire.
www.henryhikes.com

The illustrations are both charming and a graphic tour de force...that evoke the many moods of a summer day.
Horn Book

Young readers will appreciate Henry's endeavors, and commisterate with him.
School Library Journal

Fans of the series will happily follow the amiable bear as he ambles the countryside. Booklist, ALA

This title offers subtle reassurance that things that don't read like work can be quite important; kids who have had their diligent efforts to keep their worlds in order go unnoticed will feel a kinship with this observant, tireless bear.
The Bulletin of the Center for Children's Books —

This feature require that you enable JavaScript in your browser.
END_OF_DOCUMENT_TOKEN_TO_BE_REPLACED

This feature require that you enable JavaScript in your browser.
END_OF_DOCUMENT_TOKEN_TO_BE_REPLACED

This feature require that you enable JavaScript in your browser.
END_OF_DOCUMENT_TOKEN_TO_BE_REPLACED