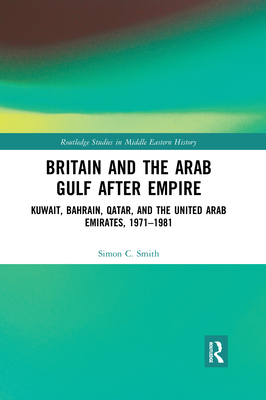 By Simon C. Smith
$48.95
Special Order - may be out of print
(This is a special order book which cannot be returned.)

Although Britain's formal imperial role in the smaller, oil-rich Sheikhdoms of the Arab Gulf - Kuwait, Bahrain, Qatar, and the United Arab Emirates - ended in 1971, Britain continued to have a strong interest and continuing presence in the region. This book explores the nature of Britain's role after the formal end of empire. It traces the historical events of the post-imperial years, including the 1973 oil shock, the fall of the Shah in Iran, and the beginnings of the Iran-Iraq War; considers the changing positions towards the region of other major world powers, including the United States; and engages with debates on the nature of empire and the end of empire. The book is a sequel to the author's highly acclaimed previous books Britain's Revival and Fall in the Gulf: Kuwait, Bahrain, Qatar, and the Trucial States, 1950-71 (Routledge 2004) and Ending Empire in the Middle East: Britain, the United States and Post-war Decolonization, 1945-1973 (Routledge 2012).

Simon C. Smith is Professor of International History at the University of Hull, UK.

This feature require that you enable JavaScript in your browser.
END_OF_DOCUMENT_TOKEN_TO_BE_REPLACED

This feature require that you enable JavaScript in your browser.
END_OF_DOCUMENT_TOKEN_TO_BE_REPLACED

This feature require that you enable JavaScript in your browser.
END_OF_DOCUMENT_TOKEN_TO_BE_REPLACED