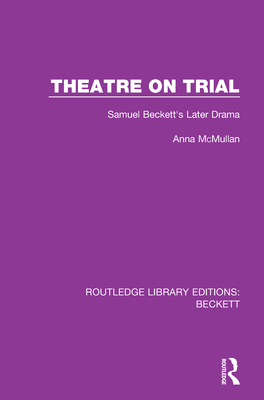 By Anna McMullan
Email or call for price.

This book, first published in 1993, is the first full-length analysis of Samuel Beckett's later drama in the context of contemporary critical and performance theory. It employs a close, textual examination of the later plays as a springboard for exploring ideas around authority, gender and the ideology of performance. Recent work in the world of critical theory has suggested new ways of looking at performance practice. McMullan argues that, while contemporary theory can deepen our understanding of Beckett's dramatic practice, his drama places performance in the context of a metaphysical history and a metatheatrical tradition, thereby confronting and provoking some of the central debates in performance studies' engagement with critical theory.

This feature require that you enable JavaScript in your browser.
END_OF_DOCUMENT_TOKEN_TO_BE_REPLACED

This feature require that you enable JavaScript in your browser.
END_OF_DOCUMENT_TOKEN_TO_BE_REPLACED

This feature require that you enable JavaScript in your browser.
END_OF_DOCUMENT_TOKEN_TO_BE_REPLACED