Feline Philosophy: Cats and the Meaning of Life (Hardcover) 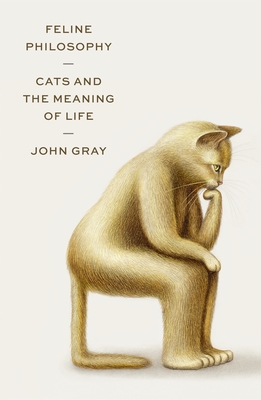 The author of Straw Dogs, famous for his provocative critiques of scientific hubris and the delusions of progress and humanism, turns his attention to cats—and what they reveal about humans' torturous relationship to the world and to themselves.

The history of philosophy has been a predictably tragic or comical succession of palliatives for human disquiet. Thinkers from Spinoza to Berdyaev have pursued the perennial questions of how to be happy, how to be good, how to be loved, and how to live in a world of change and loss. But perhaps we can learn more from cats--the animal that has most captured our imagination--than from the great thinkers of the world.

In Feline Philosophy, the philosopher John Gray discovers in cats a way of living that is unburdened by anxiety and self-consciousness, showing how they embody answers to the big questions of love and attachment, mortality, morality, and the Self: Montaigne's house cat, whose un-examined life may have been the one worth living; Meo, the Vietnam War survivor with an unshakable capacity for "fearless joy"; and Colette's Saha, the feline heroine of her subversive short story "The Cat", a parable about the pitfalls of human jealousy.

Exploring the nature of cats, and what we can learn from it, Gray offers a profound, thought-provoking meditation on the follies of human exceptionalism and our fundamentally vulnerable and lonely condition. He charts a path toward a life without illusions and delusions, revealing how we can endure both crisis and transformation, and adapt to a changed scene, as cats have always done.

John Gray is the author of many critically acclaimed books, including The Silence of Animals, The Immortalization Commission, Black Mass, and Straw Dogs. A regular contributor to The New York Review of Books, he has been a professor of politics at Oxford, a visiting professor at Harvard and Yale, and a professor of European thought at the London School of Economics. He now writes full-time.

"On the face of it, “Feline Philosophy” would seem like a departure for Gray — a playful exploration of what cats might have to teach humans in our never-ending quest to understand ourselves. But the book, in true Gray fashion, suggests that this very quest may itself be doomed . . . Gray has always been a shrewd critic, nimbly dismantling high-minded schemes and their unintended consequences."
—Jennifer Szalai, New York Times

"A short but serious polemic attacking much of the western tradition of moral thought. It’s worth a read even if — perhaps especially if — you hate cats."
—Robert Armstrong, The Financial Times

"Academia puts scholars through the wringer. Few — very few, in fact — come out willing or even able to express complex ideas in ways appealing to non-academics. John Gray is one of those rare intellectuals . . . Feline Philosophy: Cats and the Meaning of Life is broadly appealing. Even more impressive, it has readers seriously consider radical ideas . . . Intertwining stories and facts about cats with philosophy, Gray invites serious reflection without telling readers how to reason or what to think . . . The real joy of Feline Philosophy comes from the very experience of reading it. The book does not attempt to 'prove' anything."
—Paul J. D’Ambrosio, Los Angeles Review of Books

"This new account of what cats can teach us about how to live corresponds closely with what the philosopher John Gray has been teaching us about how to live life for the past few decades. Although his previous works contain occasional hints about what he considers to be the good life, this is the most direct pounce at the subject. If, like me, you consider him to be one of the most important thinkers alive, you will be eager to know what he has to say. . . In our pious age his attack on the cheap solace of moral convictions is invigorating."
—James Marriott, The Times

"Cat lovers will enjoy the celebration of feline mythos, from the cat gods of ancient Egypt to purring contemporary domestics, while hardcore Gray fans will be reassured by the usual reference to immortality cults, Hobbes, gulags and so on."
—Charles Arrowsmith, The Washington Post

“The intellectual cat’s pyjamas . . . Gray’s is the perfect book for the estranging oddness of the pandemic.”
—Tim Adams, The Observer

"Curious and exploratory . . . Gray moves freely among writing modes, including several of the potted biographies that are common to popular works of philosophy. But he also tells stories of famous cats, dabbling in evolutionary history and showing a clear appreciation for his subject. Above all, the book is an ode to cats, and Gray gives the impression of having learned from them how to take pleasure where he finds it."
—Kirkus

“A wonderful mixture of flippancy and profundity, astringency and tenderness, wit and lament.”
—Jane O’Grady, The Telegraph

“Gray offers well-timed scratches at tender bits of the human psyche and sinks some sharp teeth into a few of our most cherished self-conceptions.”
—Ian Ground, Times Literary Supplement

“Silly, playful . . . as enlightening as it is delightful.”
—John Banville, Irish Times

"Gray's work makes a strong case that our species is incorrigibly irrational, and it raises questions about humanist beliefs that should be particularly important for those of us on the political left to consider...Gray pursues the deep interest in the nonhuman world that makes his critique of humanism so shard in fang and claw."
—Oliver Hall, Dangerous Minds

"For philosophers and philosophical cat lovers. Lots of endnotes for further discovery."
—Booklist

"The book does not attempt to 'prove' anything. Gray has survived the wringer and now expertly plays with his philosophical reflections."
—Paul J. D'Ambrosio, LA Review of Books

"The bulk of Gray's fantastic book does not concern cats . . . Gray focuses on humanity's insatiable (and predominantly fruitless) attempts at happiness and our inability to reckon with the illusion of morality. . . His ten feline commandments are ultimately for us."
—Derek Beres, Big Think

This feature require that you enable JavaScript in your browser.
END_OF_DOCUMENT_TOKEN_TO_BE_REPLACED

This feature require that you enable JavaScript in your browser.
END_OF_DOCUMENT_TOKEN_TO_BE_REPLACED

This feature require that you enable JavaScript in your browser.
END_OF_DOCUMENT_TOKEN_TO_BE_REPLACED