Barking with the Big Dogs: On Writing and Reading Books for Children (Hardcover) 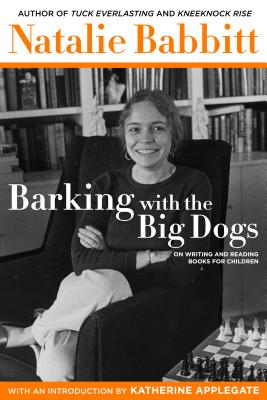 By Natalie Babbitt
$26.99
Special Order - may be out of print

In this collection of essays and speeches written over the course of four decades, beloved storyteller Natalie Babbitt explores what it was like to be a “little dog” in the literary world, continually being forced to justify her choice to write books for children—instead of doing something more serious. Babbitt offers incisive commentary on classic children’s books as well as contemporary works, and reveals colorful insights into her own personal creative life. Filled with a voice that rings with truth, wisdom, and humor across the years, the essays gathered in Barking with the Big Dogs exemplify on every page true reverence for children and an endless engagement with the challenge to write the books that shape them.

Artist and writer Natalie Babbitt (1932–2016) is the award-winning author of the modern classic Tuck Everlasting and many other brilliantly original books for young people. As the mother of three small children, she began her career in 1966 by illustrating The Forty-Ninth Magician, written by her husband, Samuel Babbitt. She soon tried her own hand at writing, publishing two picture books in verse. Her first novel, The Search for Delicious, was published in 1969 and established her reputation for creating magical tales with profound meaning. Kneeknock Rise earned Babbitt a Newbery Honor in 1971, and she went on to write—and often illustrate—many more picture books, story collections, and novels. She also illustrated the five volumes in the Small Poems series by Valerie Worth. In 2002, Tuck Everlasting was adapted into a major motion picture, and in 2016 a musical version premiered on Broadway. Born and raised in Ohio, Natalie Babbitt lived her adult life in the Northeast.

“Writing with passion and insight, the author's voice remains direct, incisive, witty, and true as she draws widely from the canon of children's and adult literature. . .[S]he astutely holds fast to the importance of giving children honest, hopeful, and entertaining stories in a changing world. A must for children's literature professionals and aficionados.” —Kirkus Reviews

“Yes, the titular big dogs are the authors and critics who populate the world of adult books. But, as Babbitt—the author of Tuck Everlasting and other staples of children's literature—demonstrates in this splendid collection of 18 essays and speeches, she could bark with the best of them. . . .It is children, as well as literature, who capture and hold her attention. She is a stalwart defender of both. As for her work, it speaks, or barks, for itself.” —Booklist

This feature require that you enable JavaScript in your browser.
END_OF_DOCUMENT_TOKEN_TO_BE_REPLACED

This feature require that you enable JavaScript in your browser.
END_OF_DOCUMENT_TOKEN_TO_BE_REPLACED

This feature require that you enable JavaScript in your browser.
END_OF_DOCUMENT_TOKEN_TO_BE_REPLACED