A True and Faithful Narrative (Hardcover) 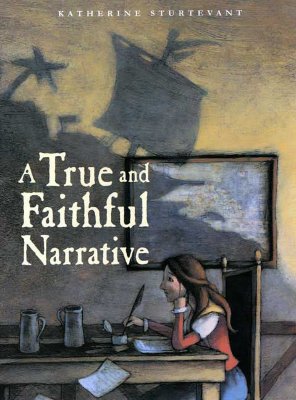 In Restoration London, sixteen-year-old Meg Moore is
something of an anomaly. Unlike other girls her age, Meg pores
over books. She spends long hours conversing with the famous
authors and poets who visit her father's bookstore, and even
writes her own stories, laboring over every word until her hand
is black with ink. Without warning, however, Meg comes to
learn exactly how powerful words can be. The day her best
friend's brother Edward sets sail for Italy, Meg scoffs at his
attempts at romance by answering him with a thoughtless jest.
Soon news travels to London that Edward's ship has been
captured and he has been sold as a slave in North Africa - and
Meg cannot shake the thought that her cruel words are the
cause. Now Meg must use her fiery language to bring Edward
home, imploring her fellow Londoners to give all that they can
to buy Edward's freedom. But once Meg learns to direct the
power behind her words, will she be able to undo the damage
she has caused, and write freely the stories that she longs to put
to paper?
This inspired sequel to "At the Sign of the Star "continues Meg's
story with elegance and elan.

KATHERINE STURTEVANT's "At the Sign of the Star "was a

"Booklist "Editors' Choice, and in a starred review they said,

"Readers will end the book hoping for a sequel." The author

"Sturtevant once again offers readers a story depicted with great clarity and many vivid details of everyday life.  Memorable."--Starred, Booklist "A quietly meticulous realization in microcosm of the collision between East and West as well as a musing on the mutability of destiny."  --The Horn Book "Readers will root for the lively heroine to find her way."  --Kirkus Reviews "Intriguing, believable glimpse into Restoration London."  --Starred, School Library Journal "An amazing book! Even though it is set in 1681, I could really relate to Meg. [She] is such a beautifully drawn character." -- A YALSA Teen YA Galley Reader

This feature require that you enable JavaScript in your browser.
END_OF_DOCUMENT_TOKEN_TO_BE_REPLACED

This feature require that you enable JavaScript in your browser.
END_OF_DOCUMENT_TOKEN_TO_BE_REPLACED

This feature require that you enable JavaScript in your browser.
END_OF_DOCUMENT_TOKEN_TO_BE_REPLACED