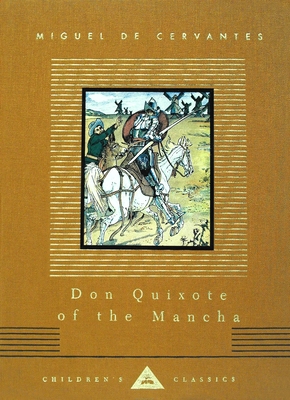 The story of the Spanish knight whose devotion to tales of chivalry leads him and his faithful squire, Sancho Panza, into a series of bizarre adventures blends fantasy, comedy, and drama in a way that has gripped the world's imagination for centuries. This edition has been abridged and adapted for children, and enhanced by the delightful illustrations of Walter Crane.

Miguel De Cervantes (1547-1616) was born to a poor family in the town of Alcalá de Henares in Spain. After being educated in Madrid (where he was his schoolmaster's 'most beloved pupil') he went to Italy where it was not long before he volunteered for the army. Cervantes took part in the great naval battle of Lepanto (1571), when the Christian powers led by the Venetians defeated the Turks in the eastern Mediterranean. As a result he was wounded in the left hand which rendered it useless and earned him the title 'El Manco de Lepanto'. In 1575, while returning to Spain from another military expedition, he was captured by pirates and taken to Algiers as a prisoner. His captivity lasted for five long years during which he made repeated efforts to escape, firmly believing that 'one should risk one's life for honour and liberty'. When Cervantes was finally ransomed he returned to Spain, not to a hero's welcome as he expected, but to find himself with no money and apparently no future. He turned to writing for his livelihood, drawing on his experiences in prison and as a soldier for his stories and plays. His early works brought neither wealth nor fame but when the first part of Don Quixote was published in 1605 it proved to be an instant success. Translated into English in 1612 it has been one of the world's most popular and influential books ever since. Even with this, however, and the second part which was published in 1614, Cervantes did not become a rich man, but he did obtain for himself a patron and was thereafter able to devote himself fully to his writings.

This feature require that you enable JavaScript in your browser.
END_OF_DOCUMENT_TOKEN_TO_BE_REPLACED

This feature require that you enable JavaScript in your browser.
END_OF_DOCUMENT_TOKEN_TO_BE_REPLACED

This feature require that you enable JavaScript in your browser.
END_OF_DOCUMENT_TOKEN_TO_BE_REPLACED