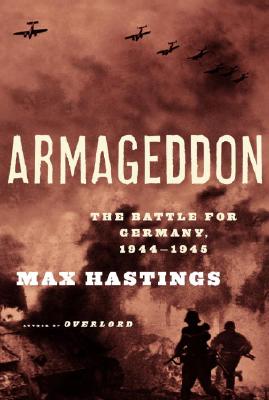 Armageddon is the epic story of the last eight months of World War II in Europe by Max Hastings–one of Britain’s most highly regarded military historians, whose accounts of past battles John Keegan has described as worthy “to stand with that of the best journalists and writers” (New York Times Book Review).

In September 1944, the Allies believed that Hitler’s army was beaten, and expected that the war would be over by Christmas. But the disastrous Allied airborne landing in Holland, American setbacks on the German border and in the Hürtgen Forest, together with the bitter Battle of the Bulge, drastically altered that timetable. Hastings tells the story of both the Eastern and Western Fronts, and paints a vivid portrait of the Red Army’s onslaught on Hitler’s empire. He has searched the archives of the major combatants and interviewed 170 survivors to give us an unprecedented understanding of how the great battles were fought, and of their human impact on American, British, German, and Russian soldiers and civilians.

Hastings raises provocative questions: Were the Western Allied cause and campaign compromised by a desire to get the Soviets to do most of the fighting? Why were the Russians and Germans more effective soldiers than the Americans and British? Why did the bombing of Germany’s cities continue until the last weeks of the war, when it could no longer influence the outcome? Why did the Germans prove more fanatical foes than the Japanese, fighting to the bitter end? This book also contains vivid portraits of Stalin, Churchill, Eisenhower, Montgomery, and the other giants of the struggle.

The crucial final months of the twentieth century’s greatest global conflict come alive in this rousing and revelatory chronicle.

"Hastings writes with authority, as well as humanity, about the realities of combat--the fear, smells, hunger, humiliation and the horrendous wounds inflicted. His range spans from the lowliest GI crouched in his foxhole in the dread Hurtgen forest to the commanders in charge. . . Every leader contemplating a military operation, for whatever reason, should read this book and take several deep breats. Armageddon is the name of the last stop on the line."--Alistair Horne, The Wall Street Journal


"Hastings does an excellent job of weaving together the war's multiple layers: from the high command and midlevel officers to infantry grunts and confused civilians. Readers get glimpses of the famous and infamous leaders--Churchill, Roosevelt, Eisenhower, Hitler, Stalin . . . Rich descriptions of displaced families mix with fascinating details..." --Clint O'Connor, Cleveland Plain Dealer


Praise from Britain for Armageddon by Max Hastings

"Magnificent . . . Armageddon is not so much a narrative history as a series of set-piece sections filled with valuable insights and good judgement. . . Hastings in this grand overview of the end of the Second World War has yet again made a great contribution to our understanding of the period." --Anthony Beevor, The Sunday Telegraph

"Armaggedon is a magesterial history of the last year of the war in Europe and a much needed corrective, delivering firm judgments in crisp prose, its acerbic take on the military history is matched by a war correspondent's compassion for human suffering." --Christopher Silvester, Financial Times

"Masterly survey . . . panoramic... Hastings is exceptionally deft at explaining complicated strategy to the layman." --Craig Brown, The Mail on Sunday

"Superb . . . Hastings's writing is a model of thoughtfulness and clarity. He conveys the pain, hunger and indignity of the battlefield with the same glittering precision with which he illuminates the plans and personalities of the commanders. Armageddon is deep and dark with the power to invade your dreams. A master historian is back and at the height of his powers." --Patrick Bishop, Telegraph

This feature require that you enable JavaScript in your browser.
END_OF_DOCUMENT_TOKEN_TO_BE_REPLACED

This feature require that you enable JavaScript in your browser.
END_OF_DOCUMENT_TOKEN_TO_BE_REPLACED

This feature require that you enable JavaScript in your browser.
END_OF_DOCUMENT_TOKEN_TO_BE_REPLACED