The Life and Times of the Thunderbolt Kid: A Memoir (Large Print / Hardcover, Large Print) 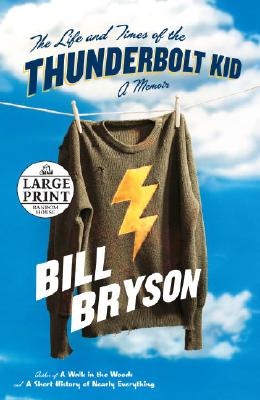 From one of the most beloved and bestselling authors in the English language, a vivid, nostalgic and utterly hilarious memoir of growing up in the middle of the United States in the middle of the last century. A book that delivers on the promise that it is “laugh-out-loud funny.”

Some say that the first hints that Bill Bryson was not of Planet Earth came from his discovery, at the age of six, of a woollen jersey of rare fineness. Across the moth-holed chest was a golden thunderbolt. It may have looked like an old college football sweater, but young Bryson knew better. It was obviously the Sacred Jersey of Zap, and proved that he had been placed with this innocuous family in the middle of America to fly, become invisible, shoot guns out of people’s hands from a distance, and wear his underpants over his jeans in the manner of Superman.

Bill Bryson’s first travel book opened with the immortal line, “I come from Des Moines. Somebody had to.” In this hilarious new memoir, he travels back to explore the kid he once was and the weird and wonderful world of 1950s America. He modestly claims that this is a book about not very much: about being small and getting much larger slowly. But for the rest of us, it is a laugh-out-loud book that will speak volumes – especially to anyone who has ever been young.

Bill Bryson's bestselling books include A Walk in the Woods, Neither Here Nor There, In a Sunburned Country, Bryson's Dictionary of Troublesome Words, and A Short History of Nearly Everything, the latter of which earned him the 2004 Aventis Prize. Bryson lives in England with his wife and children.

“A charming, funny recounting of growing up in Des Moines during the sleepy 1950s. Bryson combines nostalgia, sharp wit and a dash of hyperbole to recreate his childhood in the rural Midwest. A great, fun read, especially for Baby Boomers nostalgic for the good old days.”
–Kirkus Reviews *Starred*

“While many memoirs convey a bittersweet nostalgia, Bill Bryson’s loving look at his childhood in The Life and Times of the Thunderbolt Kid is genuinely sweet. Framed within young Bryson’s fantasy of being a superhero, it matches the author’s sparkling wit with his vivid, candid memories of 1950s America. Adding a healthy dose of social history, Bryson tells a larger story, with vignettes that reveal the gap between America’s postwar glow and its underlying angst. Bryson also touchingly recalls his father’s career as a sportswriter, his mother’s awkward experiments with cooking and the outrageous adventures of his infamous traveling companion, Stephen Katz.”
–Publishers Weekly, Fall Preview

“Bryson recounts the world of his younger self, buried in comic books in the Kiddie Corral at the local supermarket, resisting civil defense drills at school, and fruitlessly trying to unravel the mysteries of sex. His alter ego, the Thunderbolt Kid, born of his love for comic-book superheroes and the need to vaporize irritating people, serves as an astute outside observer of life around him. His family’s foibles are humorously presented, from his mother’s burnt, bland cooking to his father’s epic cheapness.
The larger world of 1950s America emerges through the lens of ‘Billy’s’ world, including the dark underbelly of racism, the fight against communism, and the advent of the nuclear age.”
–Library Journal

“Travel humorist Bryson took a decisive stand regarding his hometown almost 20 years ago when he published the story “Fat Girls in Des Moines” in Granta magazine. Now the author delves more deeply into his midwestern roots in a bittersweet laugh-out-loud recollection of his growing-up years. This affectionate portrait wistfully recalls the bygone days of Burns and Allen and downtown department stores but with a good-natured elbow poke to the ribs.”
–Booklist Reviews

"Takes us on yet another amiable ramble through terrain viewed with his characteristic mixture of bemused wit, acerbic astonishment and sweet benevolence…we come closest to the real Bryson in this, his first true memoir…encompasses so much of human experience that you want to smile and sob at once…Bryson’s evocation of an era is near perfect: tender, hilarious and true. "
–The Times (UK)

"A wittily incisive book about innocence, and its limits, but in no sense an innocent book…Like Alan Bennett, another ironist posing as a sentimentalist, Bryson can play the teddy-bear and then deliver a sudden, grizzly-style swipe…might tell us as much about the oddities of the American way as a dozen think-tanks. "
–Independent

"A funny, effortlessly readable, quietly enchanted memoir…Bryson also provides a quirky social history of America…he always manages to slam on the brakes with a good joke just when things might get sentimental. "
–Daily Mail (UK)

"He can capture the flavour of the past with the lightest of touches…marvellous set pieces…As a chronicler of the foibles and absurdities of daily life, Bryson has few peers. "
–Sunday Telegraph (UK)

"The beautifully realized elegiac tone of his childhood memoir invites readers to go tumbling down the rabbit hole of memory into the best days of their lives…by turns playful affectionate, gently mocking, laugh-out-loud funny and even wistfully sad. His greatest gift is as a humorist, however, so it is the snickers, the guffaws and the undignified belly laughs he delivers on almost every page that make it worth buying…probably the funniest book you’ll read this year. No, dammit. It is the funniest book you’ll find anytime soon. "
–Sydney Morning Herald

"Is this the most cheerful book I’ve ever read, or the saddest?...hilarious…a lovely, happy book. "
–London Evening Standard

"Bryson [writes] with a whiff of irony and a stronger perfume of affection, but never the stink of sentimentality. Darting between his life and the trajectory of America, he slips in a few key contextualising details, which he deploys with the same deft ease that made his A Short History of Nearly Everything so sneakily edifying…very few [memoirs] contain a well of happiness this deep, or this complexly rendered."
–Scotland on Sunday

This feature require that you enable JavaScript in your browser.
END_OF_DOCUMENT_TOKEN_TO_BE_REPLACED

This feature require that you enable JavaScript in your browser.
END_OF_DOCUMENT_TOKEN_TO_BE_REPLACED

This feature require that you enable JavaScript in your browser.
END_OF_DOCUMENT_TOKEN_TO_BE_REPLACED