The Discoveries: Great Breakthroughs in 20th-Century Science, Including the Original Papers (Paperback) 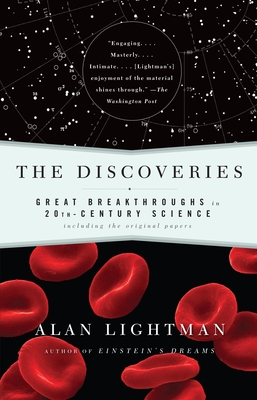 In this captivating and lucid book, novelist and science writer Alan Lightman chronicles twenty-four great discoveries of twentieth-century science--everything from the theory of relativity to mapping the structure of DNA.These discoveries radically changed our notions of the world and our place in it. Here are Einstein, Fleming, Bohr, McClintock, Paul ing, Watson and Crick, Heisenberg and many others. With remarkable insight, Lightman charts the intellectual and emotional landscape of the time, portrays the human drama of discovery, and explains the significance and impact of the work. Finally he includes a fascinating and unique guided tour through the original papers in which the discoveries were revealed. Here is science writing at its best–beautiful, lyrical and completely accessible. It brings the process of discovery to life before our very eyes.

Alan Lightman was born in Memphis, Tennessee, and educated at Princeton and at the California Institute of Technology, where he received a Ph.D. in theoretical physics. An active research scientist in astronomy and physics for two decades, he has also taught both subjects on the faculties of Harvard and MIT. Lightman’s novels include Einstein’s Dreams, which was an international best seller; Good Benito; The Diagnosis, which was a finalist for the National Book Award; and Reunion. His essays have appeared in The New York Review of Books, The New York Times, Nature, The Atlantic Monthly, and The New Yorker, among other publications. He lives in Massachusetts, where he is adjunct professor of humanities at MIT.

“An intriguing mix of the famous and unfamiliar.” –The Boston Globe

"Lightman's introductions to the discoveries are, collectively, an outstanding primer on the development of science in the twentieth century.”–The Nation

This feature require that you enable JavaScript in your browser.
END_OF_DOCUMENT_TOKEN_TO_BE_REPLACED

This feature require that you enable JavaScript in your browser.
END_OF_DOCUMENT_TOKEN_TO_BE_REPLACED

This feature require that you enable JavaScript in your browser.
END_OF_DOCUMENT_TOKEN_TO_BE_REPLACED