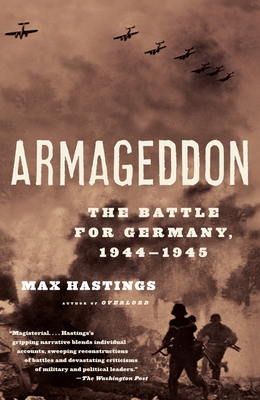 This is epic story of the last eight months of World War II in Europe by one of Britain’s most highly regarded military historians, whose accounts of past battles John Keegan has described as worthy “to stand with that of the best journalists and writers” (New York Times Book Review).

In September 1944, the Allies believed that Hitler’s army was beaten, and expected that the war would be over by Christmas. But the disastrous Allied airborne landing in Holland, American setbacks on the German border and in the Hürtgen Forest, together with the bitter Battle of the Bulge, drastically altered that timetable. Hastings tells the story of both the Eastern and Western Fronts, and paints a vivid portrait of the Red Army’s onslaught on Hitler’s empire. He has searched the archives of the major combatants and interviewed 170 survivors to give us an unprecedented understanding of how the great battles were fought, and of their human impact on American, British, German, and Russian soldiers and civilians.

Hastings raises provocative questions: Were the Western Allied cause and campaign compromised by a desire to get the Soviets to do most of the fighting? Why were the Russians and Germans more effective soldiers than the Americans and British? Why did the bombing of Germany’s cities continue until the last weeks of the war, when it could no longer influence the outcome? Why did the Germans prove more fanatical foes than the Japanese, fighting to the bitter end? This book also contains vivid portraits of Stalin, Churchill, Eisenhower, Montgomery, and the other giants of the struggle.

The crucial final months of the twentieth century’s greatest global conflict come alive in this rousing and revelatory chronicle.

Max Hastings is the author of more than twenty books, including Catastrophe 1914: Europe Goes to War, Inferno: The World at War, 1939–1945, and Winston's War: Churchill 1940-1945. He spent his early career as a foreign correspondent for BBC TV and various newspapers, then as editor of Britain’s Evening Standard and Daily Telegraph. He has received numerous awards for both his books and his journalism. He lives in the English countryside west of London.

“Magisterial. . . . Hastings’s gripping narrative blends individual accounts, sweeping reconstructions of battles and devastating criticisms of military and political leaders.” –The Washington Post Book World“Splendid . . . A book anyone with an interest in modern warfare will want to read.” –The New York Times Book Review“A grand achievement. Max Hastings is a brilliant military historian who enthralls the reader by combining mastery of high strategy and low tactics with poignant understanding of individual combat experiences. This is the last word on the last year of the greatest war in history.” –Arthur Schlesinger, Jr.“Hastings writes with authority, as well as humanity, about the realities of combat--the fear, smells, hunger, humiliation and the horrendous wounds inflicted. . . . Every leader contemplating a military operation, for whatever reason, should read this book and take several deep breaths.” –The Wall Street Journal

This feature require that you enable JavaScript in your browser.
END_OF_DOCUMENT_TOKEN_TO_BE_REPLACED

This feature require that you enable JavaScript in your browser.
END_OF_DOCUMENT_TOKEN_TO_BE_REPLACED

This feature require that you enable JavaScript in your browser.
END_OF_DOCUMENT_TOKEN_TO_BE_REPLACED