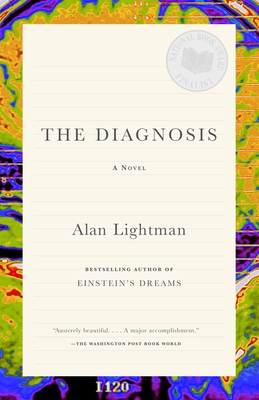 From the bestselling author of Einstein’s Dreams comes this harrowing tale of one man's struggle to cope in a wired world, even as his own biological wiring short-circuits. As Boston’s Red Line shuttles Bill Chalmers to work one summer morning, something extraordinary happens. Suddenly, he can't remember which stop is his, where he works, or even who he is. The only thing he can remember is his corporate motto: the maximum information in the minimum time.

Bill’s memory returns, but a strange numbness afflicts him. As he attempts to find a diagnosis for his deteriorating illness, he descends into a nightmarish tangle of inconclusive results, his company’s manic frenzy, and his family’s disbelief. Ultimately, Bill discovers that he is fighting not just for his body but also for his soul.

ALAN LIGHTMAN is the author of seven novels, including the international best seller Einstein’s Dreams and The Diagnosis, a finalist for the National Book Award. He has taught at Harvard and at MIT, where he was the first person to receive a dual faculty appointment in science and the humanities. He is the host of the public television series Searching: Our Quest for Meaning in the Age of Science. He is a professor of the practice of the humanities at MIT.

“A funny, troubling story about our culture’s devotion to technology
at the expense of humanity…. Clever and wise, a rare combination.”–San Francisco Chronicle

“Although the world around Bill ‘is diminished to the most feeble red light,’ the novel, at last, burns brightly.”–The New Yorker

“A searing vision of our helter-skelter and spiritually debilitating technocracy.”–The Chicago Tribune

This feature require that you enable JavaScript in your browser.
END_OF_DOCUMENT_TOKEN_TO_BE_REPLACED

This feature require that you enable JavaScript in your browser.
END_OF_DOCUMENT_TOKEN_TO_BE_REPLACED

This feature require that you enable JavaScript in your browser.
END_OF_DOCUMENT_TOKEN_TO_BE_REPLACED