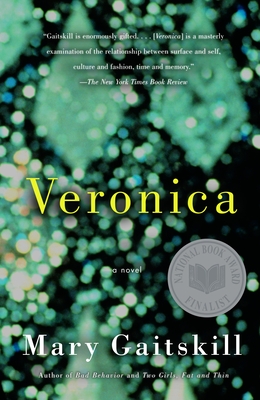 Set mostly in Paris and Manhattan in the 1980's, Mary Gaitskill's novel is about a former fashion model, Alison (the narrator) and her friend, the eccentric Veronica. With gritty ("a pulled-back noisy face") and musical ("traffic knotted jewelry") prose Gaitskill creates a modern-day fairy tale: a story of friendship, family, illness, and love.

If you haven't read Mary Gaitskill before, this is a good place to start. One of the NYTBR's eleven best books of the year in 2005. Also, a National Book Award and National Book Critics' Circle Award Finalist. Dazzling and unforgettable!

A finalist for the National Book Award and National Book Critics Circle Award, here is an evocative novel about female friendship in the glittering 1980s.

Alison and Veronica meet amid the nocturnal glamour of 1980s New York: One is a young model stumbling away from the wreck of her career, the other an eccentric middle-aged office temp. Over the next twenty years their friendship will encompass narcissism and tenderness, exploitation and self-sacrifice, love and mortality. Moving seamlessly from present and past, casting a fierce yet compassionate eye on two eras and their fixations, the result is a work of timeless depth and moral power.

Mary Gaitskill is the author of the story collections Bad Behavior, Because They Wanted To (nominated for a PEN/Faulkner Award), and Don’t Cry, and the novels The Mare, Veronica (nominated for a National Book Award) and Two Girls, Fat and Thin. She has received a Guggenheim Fellowship, and her work has appeared in The New Yorker, Harper’s, Esquire, The Best American Short Stories, and The O. Henry Prize Stories.

“Gatiskill is enormously gifted. . . . [Veronica] is a masterly examination of the relationship between surface and self, culture and fasion, time and memory." —The New York Times Book Review

"Gaitskill has written a novel that will leave you shaking and joyful simultaneously, dizzy with the proximity of private terror and bottomless hope." —O, The Oprah Magazine

“Twisted, beautiful, grotesque, graceful, and exceedingly well-executed. People write their whole lives in the hope of coming up with just one sentences that rises to the level of this book.” —The Sunday Oregonian

“Gaitskill taps into a deeper vein of emotional force, and with vivid language and an absorbing architecture, she delivers her most affecting, sophisticated work to date.” —The Boston Globe

“Beautiful, devastating. . . . Gaitskill devotes almost religious attention to language and to our failure to make our lives as grand as the art we love. There are paragraphs like poems in Veronica that lure you back, over and over.” —Elle

"Gaitskill writes so radiantly about violent self-loathing that the very incongruousness of her language has shocking power." —Janet Maslin, The New York Times

"Gaitskill writes from the gut . . . [Her] characters bleed, sweat, cry, and they experience sadness, anger and love as much as a physical sensation as an emotion." —San Francisco Chronicle

"Gaitskill's style is gorgeously caustic . . . Her ability to capture abstract feelings and sensations with a prescise and unexpected metaphor is a squirmy delight to encounter in such abundance." —Heidi Julavits, Pubishers Weekly

“[Veronica] creates an atmosphere, provokes a response, and suffuses us with an emotion that we can easily, all too easily, summon up. It's art that you can continue to see even with your eyes closed." —Francine Prose, Slate

This feature require that you enable JavaScript in your browser.
END_OF_DOCUMENT_TOKEN_TO_BE_REPLACED

This feature require that you enable JavaScript in your browser.
END_OF_DOCUMENT_TOKEN_TO_BE_REPLACED

This feature require that you enable JavaScript in your browser.
END_OF_DOCUMENT_TOKEN_TO_BE_REPLACED