The Lady and the Panda: The True Adventures of the First American Explorer to Bring Back China's Most Exotic Animal (Paperback) 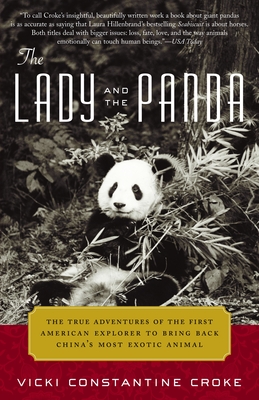 Here is the astonishing true story of Ruth Harkness, the Manhattan bohemian socialite who, against all but impossible odds, trekked to Tibet in 1936 to capture the most mysterious animal of the day: a bear that had for countless centuries lived in secret in the labyrinth of lonely cold mountains. In The Lady and the Panda, Vicki Constantine Croke gives us the remarkable account of Ruth Harkness and her extraordinary journey, and restores Harkness to her rightful place along with Sacajawea, Nellie Bly, and Amelia Earhart as one of the great woman adventurers of all time.

Ruth was the toast of 1930s New York, a dress designer newly married to a wealthy adventurer, Bill Harkness. Just weeks after their wedding, however, Bill decamped for China in hopes of becoming the first Westerner to capture a giant panda–an expedition on which many had embarked and failed miserably. Bill was also to fail in his quest, dying horribly alone in China and leaving his widow heartbroken and adrift. And so Ruth made the fateful decision to adopt her husband’s dream as her own and set off on the adventure of a lifetime.

It was not easy. Indeed, everything was against Ruth Harkness. In decadent Shanghai, the exclusive fraternity of white male explorers patronized her, scorned her, and joked about her softness, her lack of experience and money. But Ruth ignored them, organizing, outfitting, and leading a bare-bones campaign into the majestic but treacherous hinterlands where China borders Tibet. As her partner she chose Quentin Young, a twenty-two-year-old Chinese explorer as unconventional as she was, who would join her in a romance as torrid as it was taboo.

Traveling across some of the toughest terrain in the world–nearly impenetrable bamboo forests, slick and perilous mountain slopes, and boulder-strewn passages–the team raced against a traitorous rival, and was constantly threatened by hordes of bandits and hostile natives. The voyage took months to complete and cost Ruth everything she had. But when, almost miraculously, she returned from her journey with a baby panda named Su Lin in her arms, the story became an international sensation and made the front pages of newspapers around the world. No animal in history had gotten such attention. And Ruth Harkness became a hero.

Drawing extensively on American and Chinese sources, including diaries, scores of interviews, and previously unseen intimate letters from Ruth Harkness, Vicki Constantine Croke has fashioned a captivating and richly textured narrative about a woman ahead of her time. Part Myrna Loy, part Jane Goodall, by turns wisecracking and poetic, practical and spiritual, Ruth Harkness is a trailblazing figure. And her story makes for an unforgettable, deeply moving adventure.

Vicki Constantine Croke has been exploring animal life for more than two decades—tracking the fossa in Madagascar, polar bears in the Arctic Circle, and Tasmanian devils in, of course, Tasmania. She now covers creatures great and small for WBUR-FM, Boston’s NPR news station, on air and as The Animalist online. Her work there earned a 2013 regional Edward R. Murrow Award. She is the author of The Lady and the Panda: The True Adventures of the First American Explorer to Bring Back China’s Most Exotic Animal, The Modern Ark: The Story of Zoos—Past, Present and Future, and Elephant Company: The Inspiring Story of an Unlikely Hero and the Animals Who Helped Him Save Lives in World War II. Croke has worked on nature documentaries for Disney and for the A&E channel and anchored The Secret Life of Animals on NECN-TV. She also wrote The Boston Globe’s “Animal Beat” column for for thirteen years, and has contributed to The New York Times, The Washington Post, The London Sunday Telegraph, Time, Popular Science, O: The Oprah Magazine, Gourmet, National Wildlife, and Discover magazine, among others. She lives in the Boston area.

Advance Praise for THE LADY AND THE PANDA


“A remarkable journey beautifully described, The Lady and the Panda brings to life one of the most astonishing and overlooked stories of American adventure, the 1936 quest by Ruth Harkness to bring a giant panda to America. Vicki Constantine Croke’s canvas is the mystical and wondrous China of the 1930s, her heroine a most remarkable woman, and her gift the ability to understand that this is a great love story.”
–ROBERT KURSON, author of Shadow Divers

“Mesmerizing. Vicki Croke has done a magnificent job of immersing the reader in an absolutely fascinating world. I found myself completely absorbed and could not stop reading. Amazing.”
–JEFFREY MOUSSAIEFF MASSON, author of When Elephants Weep

“Ruth Harkness, the New York socialite who journeyed into the wilds of China to bring the Giant Panda to America, now has the biography she deserves. In Croke’s hands, the intrepid American woman and the con men, dreamers, and adventurers who joined her in pursuit of the world’s most exotic animal spring vividly to life. Part Hemingway, part Treasure of Sierra Madre, The Panda Hunter is a rare blend of adventure, biography, and zoology. A deeply satisfying read.”
–STELLA DONG, author of Shanghai

This feature require that you enable JavaScript in your browser.
END_OF_DOCUMENT_TOKEN_TO_BE_REPLACED

This feature require that you enable JavaScript in your browser.
END_OF_DOCUMENT_TOKEN_TO_BE_REPLACED

This feature require that you enable JavaScript in your browser.
END_OF_DOCUMENT_TOKEN_TO_BE_REPLACED