Sammy Keyes and the Sisters of Mercy (Paperback) 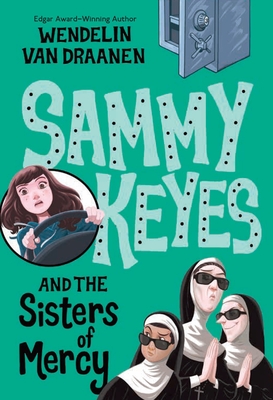 This is book number 3 in the Sammy Keyes series.

Sometimes it's hard to tell the saints from the sinners...

Sammy was supposed to be in church to get out of trouble, not into more. But while she's at St. Mary's working off some school detention time, a valuable cross goes missing and Sammy becomes the prime suspect.

She knows she's innocent, and also what it feels like to lose something important. Her treasured catcher's mitt has been stolen--heartless Heather must have taken it to throw Sammy off her game in the upcoming softball play-offs. Trouble is, it's working. Sammy needs that glove back.

Throw in nuns in feather boas, a homeless girl in high-tops, a carrot-chomping dog, and a safe that needs cracking, and you've got just another week in the life of Sammy Keyes.

“The sleuth delights from start to finish. Keep your binoculars trained on Sammy Keyes.” —Publishers Weekly

“Sammy Keyes is the hottest sleuth to appear in children’s books since Nancy Drew.”—The Boston Globe

This feature require that you enable JavaScript in your browser.
END_OF_DOCUMENT_TOKEN_TO_BE_REPLACED

This feature require that you enable JavaScript in your browser.
END_OF_DOCUMENT_TOKEN_TO_BE_REPLACED

This feature require that you enable JavaScript in your browser.
END_OF_DOCUMENT_TOKEN_TO_BE_REPLACED