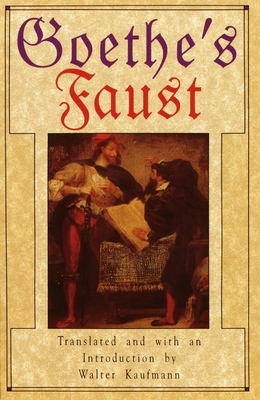 The best translation of Faust available, this volume provides the original German text and its English counterpart on facing pages. Walter Kaufmann's translation conveys the poetic beauty and rhythm as well as the complex depth of Goethe's language. Includes Part One and selections from Part Two.

Before he was thirty, Johann Wolfgang von Goethe had proven himself a master of the novel, drama, and lyric poetry. But even more impressive than his versatility was his unwillingness ever to settle into a single style or approach; whenever he used a literary form, he made it something new.Born in 1749 to a well-to-do family in Frankfurt, he was sent to Strasbourg to earn a law degree. There, he met the poet-philosopher Herder, discovered Shakespeare, and began to write poetry. His play Götz von Berlichingen (1773) made him famous throughout Germany. He was invited to the court of the Duke of Saxe-Weimar, where he quickly became a cabinet minister. In 1774 his novel of Romantic melancholy, The Sorrows of a Young Werther, electrified all of Europe. Soon he was at work on the first version of his Faust, which would finally appear as a fragment in 1790.In the 1780s, Goethe visited England and immersed himself in classical poetry. The next decade saw the appearance of Wilhelm Meister’s Apprenticeship, his novel of a young artist's education, and a wealth of poetry and criticism. He returned to the Faust material around the turn of the century and completed Part 1 in 1808.The later years of his life were devoted to a bewildering array of pursuits: research in botany and a theory of colors, a novel (Elective Affinities), the evocative poems of the West-Eastern Divan, and his great autobiography, Poetry and Truth. In his eighties he prepared a forty-volume edition of his works; the forty-first volume, published after his death in 1832, was the second part of Faust.Goethe’s wide-ranging mind could never be confined to one form or one philosophy. When asked for the theme of his masterwork, Faust, he could only say, “From heaven through all the world to hell”; his subject was nothing smaller.

Walter Kaufmann was a philosopher and poet, as well as a renowned translator of Friedrich Nietzsche. His books include Nietzsche: Philosopher, Psychologist, Antichrist, From Shakespeare to Existentialism, and Existentialism: From Dostoevsky to Sartre. He was a Professor of Philosophy at Princeton University, where he taught after receiving his Ph.D. from Harvard in 1947 until his death in 1980. He held visiting appointments at many American and foreign universities, including Columbia, Cornell, Heidelberg, Jerusalem, and the Australian National University, and his books have been translated into Dutch, German, Italian, Japanese, and Spanish.

This feature require that you enable JavaScript in your browser.
END_OF_DOCUMENT_TOKEN_TO_BE_REPLACED

This feature require that you enable JavaScript in your browser.
END_OF_DOCUMENT_TOKEN_TO_BE_REPLACED

This feature require that you enable JavaScript in your browser.
END_OF_DOCUMENT_TOKEN_TO_BE_REPLACED