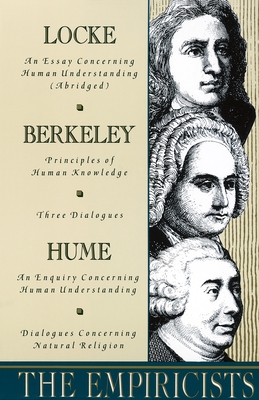 The rise and fall of British Empiricism is philosophy's most dramatic example of pushing premises to their logical--and fatal--conclusions. Born in 1690 with the appearance of Locke's Essay, Empiricism flourished as the reigning school until 1739 when Hume's Treatise strangled it with its own cinctures after a period of Berkeley's optimistic idealism. The Empiricists collects the key writings on this important philosophy, perfect for those interested in learning about this movement with just one book.

John Locke (1632-1704) was educated at Christ Church, Oxford and held various academic posts at that university, lecturing on Greek and rhetoric. An English philosopher and physician, he is widely regarded as one of the most influential of Enlightenment thinkers and commonly known as the "Father of Liberalism." He wrote also on theology, education, and in defence of religous tolerance, while founding the analytic philosophy of the mind.

David Hume (1711-1776) was a Scottish philosopher, historian, economist, and essayist, who is best known today for his highly influential system of radical philosophical empiricism, skepticism, and naturalism. As well as his Essays, which were republished and expanded throughout his life, he wrote A Treatise of Human Nature.

George Berkeley (1685-1753) was an Irish philosopher best known for the advancement of a theory he called "immaterialism." He wrote A Treatise Concerning the Principles of Human Knowledge in 1710.

This feature require that you enable JavaScript in your browser.
END_OF_DOCUMENT_TOKEN_TO_BE_REPLACED

This feature require that you enable JavaScript in your browser.
END_OF_DOCUMENT_TOKEN_TO_BE_REPLACED

This feature require that you enable JavaScript in your browser.
END_OF_DOCUMENT_TOKEN_TO_BE_REPLACED