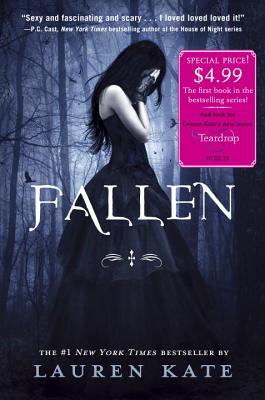 “Angels, both good and bad, are among us! Fallen is romantic, dark, thrilling and at the same time puts a new twist on immortality. So take wing with exciting romance and adventure and take a break from immortals who want your blood!”
— Becky Anderson, Anderson's Bookshop, Naperville, IL

What if the person you were meant to be with could never be yours?

Mysterious and aloof, he captures Luce Price's attention from the moment she sees him on her first day at the Sword & Cross boarding school in sultry Savannah, Georgia. He's the one bright spot in a place where cell phones are forbidden, the other students are all screw-ups, and security cameras watch every move.

Even though Daniel wants nothing to do with Luce--and goes out of his way to make that very clear--she can't let it go. Drawn to him like a moth to a flame, she has to find out what Daniel is so desperate to keep secret . . . even if it kills her.

Dangerously exciting and darkly romantic, Fallen is a page turning thriller and the ultimate love story.

LAUREN KATE is the internationally bestselling author of the Teardrop series, the Fallen novels: "Fallen, Torment, Passion, Rapture," and "Fallen in Love," and "The Betrayal of Natalie Hargrove." Her books have been translated into more than 30 languages. She lives in Los Angeles with her husband. Visit her online at LaurenKateBooks.net.

This feature require that you enable JavaScript in your browser.
END_OF_DOCUMENT_TOKEN_TO_BE_REPLACED

This feature require that you enable JavaScript in your browser.
END_OF_DOCUMENT_TOKEN_TO_BE_REPLACED

This feature require that you enable JavaScript in your browser.
END_OF_DOCUMENT_TOKEN_TO_BE_REPLACED