Robert Oppenheimer: A Life Inside the Center (Paperback) 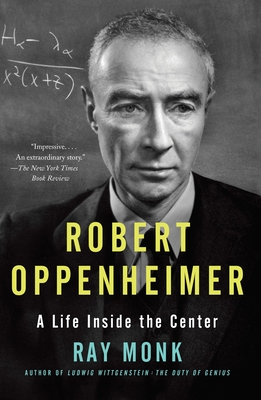 An unforgettable story of discovery and unimaginable destruction and a major biography of one of America’s most brilliant—and most divisive—scientists, Robert Oppenheimer: A Life Inside the Center vividly illuminates the man who would go down in history as “the father of the atomic bomb.” Oppenheimer’s talent and drive secured him a place in the pantheon of great physicists and carried him to the laboratories where the secrets of the universe revealed themselves. But they also led him to contribute to the development of the deadliest weapon on earth, a discovery he soon came to fear. His attempts to resist the escalation of the Cold War arms race—coupled with political leanings at odds with post-war America—led many to question his loyalties, and brought down upon him the full force of McCarthyite anti-communism. Digging deeply into Oppenheimer’s past to solve the enigma of his motivations and his complex personality, Ray Monk uncovers the extraordinary, charming, tortured man—and the remarkable mind—who fundamentally reshaped the world.

Ray Monk is the author of Ludwig Wittgenstein: The Duty of Genius, for which he was awarded the John Llewellyn Rhys Prize and the Duff Cooper Prize, and a two-volume biography of Bertrand Russell. He is Professor of Philosophy at the University of Southampton.

“Judicious, comprehensive and reliable. . . . By far the most thorough survey yet written of Oppenheimer’s physics. . . . A convincing portrait.”
—Washington Post

“Oppenheimer is fortunate to have been given such an exemplary biographer.”
—New Scientist

“Essential reading for Oppie enthusiasts, even those who don't know a meson from a cosmic ray (and don't much care).”
—Chicago Tribune

“A masterclass in how biography, done well, gets us closer to the mindset of an age than any other kind of inquiry.”
—The Guardian (London)

“Monk is a levelheaded and congenial guide to Oppenheimer’s life. . . . [His] discussion of Oppenheimer’s work in physics is one of his book’s great contributions to the saga, an area of the man’s life that previous biographies have neglected.”
—The Daily Beast

“Monk’s book is a tour de force. . . . This will, I am sure, establish itself as the definitive biography.”
—Lisa Jardine, Financial Times

“An enigma to many of his contemporaries, Oppenheimer made enemies as easily as friends. Monk is at his best when teasing apart Oppenheimer’s confusing inner life, finding in his ‘enigmatic elusiveness’ and ‘his inability to make ordinary close contact’ with others the source of his acknowledged genius in leading the Manhattan Project.” —San Francisco Chronicle

“An extraordinarily rich biography, superbly researched and written with impressive clarity. It is a considerable achievement of scholarship.”
—The Times (London)

“Does what nothing so far written on the enigmatic physicist has attempted: integrating into a seamless whole a profound inquiry into the formative influences on Oppenheimer’s character, a definitive account of his complex role in the development of the atomic bomb and a penetrating analysis of the philosophical implications of the new physics. It is not just a great biography but a powerful work of art.”
—New Statesman (London)

“Monk describes and explains Oppenheimer’s contributions to physics and places them in their historical context. . . . The permutations of the Oppenheimer enigma are investigated in this nonpareil biography.”
—The Buffalo News

“It is the epic story of the atomic bomb and Oppenheimer’s fall from grace in the McCarthyite era that stir the reader. . . . Science has received short shrift from [Oppenheimer’s] several biographers. It is this that Ray Monk’s life has set out to rectify.”
—The Independent (London)

“A triumph of historical investigation. . . . It is the most personal and sensitive biography of Oppenheimer so far published; the man himself rises from the pages, a figure worthy at times of reverence, but often of contempt.”
—The Telegraph (London)

“Monk retells this great 20th-century tragedy magnificently, in measured English prose, not Time journalese. . . . The tension between Oppenheimer’s two sides—his need to be at the centre of power versus his wish to retain his conscience—lie at the heart of [this] wonderful new biography.”
—The Observer (London)

“[The book paints] a detailed picture of two groups of people who played an important role in Oppenheimer’s life: the tightly knit society of wealthy German New York Jews to which his parents belonged, and the small army of security officers who monitored his social and political activities when he was engaged in secret work in Berkeley and Los Alamos. . . . Monk brings these two groups vividly to life.”
—The New York Review of Books

“It’s not just brilliant, original, and the best biography of Oppenheimer to date, it’s epic. Also totally gripping and immensely satisfying. . . . I’ve read so much about Oppenheimer, but this is the first time I felt I understood why what happened to him happened.”
—Sylvia Nasar, author of A Beautiful Mind and Grand Pursuit: The Story of Economic Genius

“[Monk is an] inspired philosophical biographer. . . . This is an eagerly awaited and important book which will explore new boundaries in the writing of biography itself.”
—Richard Holmes, author of The Age of Wonder

“Oppenheimer alone is a fascinating subject, but Monk provides copious illuminating detail from the historical surround. . . . [A] superb biography.”
—London Review of Books

“This grand biography illuminates the genius of a fascinating scientist as driven by his own research as he was driven to lead and inspire others.”
—Publishers Weekly

“A highly detailed examination. . . . Monk does full justice to Oppenheimer’s irreplaceable contribution to the development of nuclear energy during and after World War II. . . . A top-notch biography.”
—Kirkus Reviews (starred review)

This feature require that you enable JavaScript in your browser.
END_OF_DOCUMENT_TOKEN_TO_BE_REPLACED

This feature require that you enable JavaScript in your browser.
END_OF_DOCUMENT_TOKEN_TO_BE_REPLACED

This feature require that you enable JavaScript in your browser.
END_OF_DOCUMENT_TOKEN_TO_BE_REPLACED