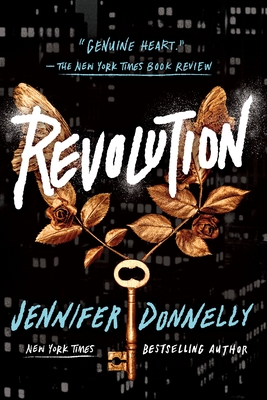 “Andi Alpers is a girl lost in a dark labyrinth of depression since the tragic death of her younger brother. A visit to Paris with her estranged father leads Andi to the discovery of a long-lost Revolutionary-era journal and an obsession with the author's quest to save the life of a young prince. The mix of historical and modern drama creates a gripping tale of two girls, centuries apart, searching for redemption.”
— Sandy Scott, The Galaxy Bookshop, Hardwick, VT

Readers of If I Stay and Elizabeth George will love Revolution by Jennifer Donnelly, New York Times bestselling author of Stepsister, Poisoned, These Shallow Graves, and the award-winning novel A Northern Light.

Andi Alpers is on the edge. She’s angry at her father for leaving, angry at her mother for not being able to cope, and heartbroken by the loss of her younger brother, Truman. Rage and grief are destroying her. And her father has determined that accompanying him to Paris for winter break is the solution for everything.
But Paris is a city of ghosts for Andi. And when she finds a centuries-old diary, the ghosts begin to walk off the page. Alexandrine, the owner of the journal, lived during the French Revolution. She’s angry too. It’s the same fire that consumes Andi, and Andi finds comfort in it—until, on a midnight journey through the catacombs, words transcend paper and time, and the past becomes terrifyingly present.
Revolution artfully weaves two girls’ stories into one unforgettable account of life, loss, and enduring love. Revolution spans centuries and vividly depicts the eternal struggles of the human heart.

★ “A sumptuous feast of a novel, rich in mood, character, and emotion.”—SLJ, Starred Review

★ “Every detail is meticulously inscribed into a multi-layered narrative that is as wise, honest, and moving as it is cunningly worked. Readers  . . . will find this brilliantly crafted work utterly absorbing.”—The Bulletin, Starred Review

★ “Brilliantly realized, complete, and complex. The novel is rich with detail, and both the Brooklyn and Paris settings provide important grounding for the haunting and beautifully told story.”—Kirkus Reviews, Starred Review

Jennifer Donnelly is the author of three adult novels, The Tea Rose, The Winter Rose, and The Wild Rose, as well as the young adult novels These Shallow Graves, Revolution, Stepsister, Poisoned and A Northern Light, winner of Britain's prestigious Carnegie Medal, the L.A. Times Book Prize for Young Adult Literature, and a Michael L. Printz Honor Book Award. She lives and writes full-time in upstate New York. You can visit her at jenniferdonnelly.com or find @JenWritesBooks on Twitter.

[STAR] “Andi Alpers, a 17-year-old music lover, is about to be expelled from her elite private school. Despite her brilliance, she has not been able to focus on anything except music since the death of her younger brother, which pushed the difficulties in her family to the breaking point. She resists accompanying her work-obsessed father to Paris, especially after he places her mentally fragile mother in a hospital, but once there works in earnest on her senior thesis about an 18th-century French musician. But when she finds the 200-year-old diary of another teen, Alexandrine Paradis, she is plunged into the chaos of the French Revolution. Soon, Alex’s life and struggles become as real and as painful for Andi as her own troubled life. Printz Honor winner Donnelly combines compelling historical fiction with a frank contemporary story. Andi is brilliantly realized, complete and complex. The novel is rich with detail, and both the Brooklyn and Paris settings provide important grounding for the haunting and beautifully told story.”
-Kirkus Reviews, Starred

[STAR] “Every detail is meticulously inscribed into a multi-layered narrative that is as wise, honest, and moving as it is cunningly worked…The interplay between the contemporary and the historical is seamless in both plot and theme, and the storytelling grips hard and doesn’t let go. Readers fascinated with French history, the power of music, and/or contemporary realist fiction will find this brilliantly crafted work utterly absorbing.”
-The Bulletin of the Center for Children's Books, Starred

[STAR] "Andi Alpers’s younger brother died two years ago and his death has torn her family apart. She’s on antidepressants and is about to flunk out of her prep school. Her mother spends all day painting portraits of her lost son and her father has all but disappeared, focusing on his Nobel Prize-winning genetics work. He reappears suddenly at the beginning of winter break to institutionalize his wife and whisk Andi off to Paris with him. There he will be conducting genetic tests on a heart rumored to belong to the last dauphin of France. He hopes that Andi will be able to put in some serious work on her senior thesis regarding mysterious 18th-century guitarist Amadé Malherbeau. In Paris, Andi finds a lost diary of Alexandrine Paradis, companion to the dauphin, and meets Virgil, a hot Tunisian-French world-beat hip-hop artist. Donnelly’s story of Andi’s present life with her intriguing research and growing connection to Virgil overshadowed by depression is layered with Alexandrine’s quest, first to advance herself and later to somehow save the prince from the terrors of the French Revolution. While teens may search in vain for the music of the apparently fictional Malherbeau, many will have their interest piqued by the connections Donnelly makes between classical musicians and modern artists from Led Zeppelin to Radiohead. Revolution is a sumptuous feast of a novel, rich in mood, character, and emotion. With multiple hooks, it should appeal to a wide range of readers."
-School Library Journal, Starred

"Even kids who don’t usually like historical fiction won’t be able to put Revolution down, especially given its great modern-day story."
-PublishersWeekly.com

"Before the book is done ... we'll have taken a long strange trip of our own in Andi's company: back and forth between present-tense Andi and past-tense Alexandrine, between contemporary Paris and the filthy, terrorized streets of Robespierre's day, and deep into the clammy, bone-filled catacombs that underlie the city and where, in this ... memorable novel, past and present connect in a frightening, disorienting fashion."
-The Wall Street Journal

"As in her previous novel for young adults, the award-winning A Northern Light, Jennifer Donnelly combines impeccable historical research with lively, fully fashioned characters to create an indelible narrative. Revolution is a complex story, moving back and forth in time and including allusions not only to historical events but also to literature (especially Dante’s Divine Comedy) and to music from Handel to Wagner to Radiohead. Yet this undeniably cerebral book is also simultaneously wise and achingly poignant."
-BookPage.com

“This beautiful and complicated story effortlessly blends history, romance, music and tragedy into a must-read about two girls who connect across centuries.”
-Justine Magazine

"Revolution is an exciting foray into history, music and grief. It's a melodic story of love and friendship—of bonds that tie time together.”
-The Daily Monacle (blog)

This feature require that you enable JavaScript in your browser.
END_OF_DOCUMENT_TOKEN_TO_BE_REPLACED

This feature require that you enable JavaScript in your browser.
END_OF_DOCUMENT_TOKEN_TO_BE_REPLACED

This feature require that you enable JavaScript in your browser.
END_OF_DOCUMENT_TOKEN_TO_BE_REPLACED