The Power of One (Hardcover) 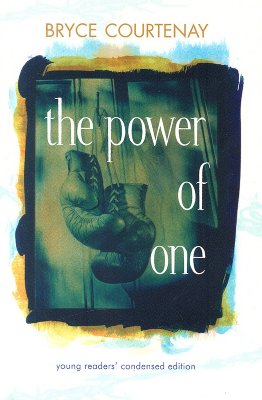 In 1939, hatred took root in South Africa, where the seeds of apartheid were newly sown. There a boy called Peekay was born. He spoke the wrong language–English. He was nursed by a woman of the wrong color–black. His childhood was marked by humiliation and abandonment. Yet he vowed to survive–he would become welterweight champion of the world, he would dream heroic dreams.
But his dreams were nothing compared to what awaited him. For he embarked on an epic journey, where he would learn the power of words, the power to transform lives, and the mystical power that would sustain him even when it appeared that villainy would rule the world: The Power of One.

“The Power of One has everything: suspense, the exotic, violence; mysticism, psychology and magic; schoolboy adventures, drama in the boxing ring.”
–The New York Times

This feature require that you enable JavaScript in your browser.
END_OF_DOCUMENT_TOKEN_TO_BE_REPLACED

This feature require that you enable JavaScript in your browser.
END_OF_DOCUMENT_TOKEN_TO_BE_REPLACED

This feature require that you enable JavaScript in your browser.
END_OF_DOCUMENT_TOKEN_TO_BE_REPLACED