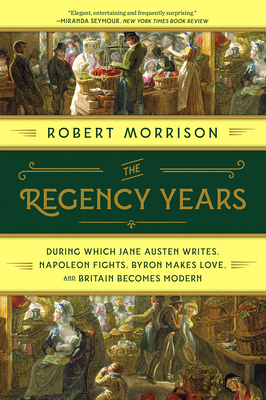 An Economist History Book of the Year

The Victorians are often credited with ushering in our current era, yet the seeds of change were planted during the earlier Regency period (1811–1820) when the profligate Prince of Wales—the future king George IV—succeeded his father. Around the Prince Regent surged a society of contrasts: evangelicalism and hedonism, elegance and brutality, exuberance and despair. Capturing the Napoleonic Wars, the rise of artists—the Shelleys, Austen, Keats, Byron, Turner—scientists and inventors—Stevenson, Davy, Faraday—and a cast of dissident journalists, military leaders, and fashionistas, Robert Morrison captivatingly illuminates the ways this period shaped the modern world.

Robert Morrison is British Academy Global Professor at Bath Spa University in England, and a Fellow of the Royal Society of Canada. He has produced editions of works by Jane Austen and Thomas De Quincey. He lives in Bath, England.

Given such plenty, what more could one ask from a work of cultural history?
— Michael Dirda - Washington Post

Superb.… The Regency period lasted for less than a decade but, as Mr. Morrison argues, ‘its many legacies are still all around us.’ It was also, as this book amply proves, marvellously entertaining.
— Economist

The Prince Regent… ruled over a period of extraordinary creativity and it is that progressive cultural legacy that Mr. Morrison commends to contemporary Britain and the rest of the world.
— Ruth Scurr - Wall Street Journal

Robert Morrison is my ideal of what a scholar should be—lively and interesting, he makes the past relevant to today.
— David Morrell, author of the Thomas and Emily De Quincey trilogy

The Regency Years reads like a romance novel of its period without the novel, but makes an entertaining nonfiction read with superior prose and dialogue.

Readers of this brilliant book will enjoy a rich experience, full of memorable surprises.
— Patricia Meyer Spacks, author of The Female Imagination

This feature require that you enable JavaScript in your browser.
END_OF_DOCUMENT_TOKEN_TO_BE_REPLACED

This feature require that you enable JavaScript in your browser.
END_OF_DOCUMENT_TOKEN_TO_BE_REPLACED

This feature require that you enable JavaScript in your browser.
END_OF_DOCUMENT_TOKEN_TO_BE_REPLACED