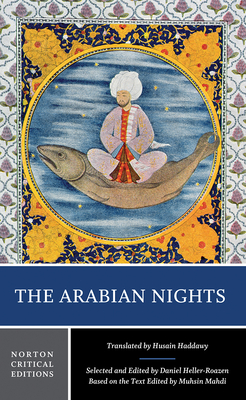 This Norton Critical Edition includes twenty-eight tales from The Arabian Nights translated by Husain Haddawy on the basis of the oldest existing Arabic manuscript.

Few works of literature are as familiar and beloved as The Arabian Nights. Yet few remain also as unknown. In English, The Arabian Nights is a literary work of relatively recent date—the first versions of the tales appeared in English barely two hundred years ago. The tales are accompanied by a preface, a note on the text, and explanatory annotations.

“Contexts” presents three of the oldest witnesses to The Arabian Nights in the Arabic tradition, together in English for the first time: an anonymous ninth-century fragment, Al Mas‘udi’s Muruj al-Dhahab, and Ibn al-Nadim’s The Fihrist. Also included are three related works by the nineteenth- and twentieth-century writers Edgar Allan Poe, Marcel Proust, and Taha Husayn.

A Chronology of The Arabian Nights and a Selected Bibliography are also included.

Husain Haddawy was born and grew up in Baghdad, taught English and comparative literature at various American universities, wrote art criticism, and is now living in retirement in Thailand.

Daniel Heller-Roazen is the Arthur W. Marks ’19 Professor of Comparative Literature and the Council of the Humanities at Princeton University. He is the author of The Enemy of All: Piracy and the Law of Nations; The Inner Touch: Archaeology of a Sensation, awarded the Aldo and Jeanne Scaglione Prize for Comparative Literature Studies in 2008; Echolalias: On the Forgetting of Language; and Fortune’s Faces: The Roman de la Rose and the Poetics of Contingency. He has published articles on classical, medieval, and modern literature and philosophy and has edited, translated, and introduced Giorgio Agamben’s Potentialities: Collected Essays in Philosophy. Heller-Roazen’s books have been translated into many languages.

The resourceful Shahrazad has never been more entertaining than in this fresh and vigorous version of this immortal book.
— Doris Lessing - The Independent

Indispensable. Not a new version of an old favorite, but a work we’ve never known.
— Geoffrey O'Brien - Voice Literary Supplement

This feature require that you enable JavaScript in your browser.
END_OF_DOCUMENT_TOKEN_TO_BE_REPLACED

This feature require that you enable JavaScript in your browser.
END_OF_DOCUMENT_TOKEN_TO_BE_REPLACED

This feature require that you enable JavaScript in your browser.
END_OF_DOCUMENT_TOKEN_TO_BE_REPLACED