The Way to Cook (Hardcover) 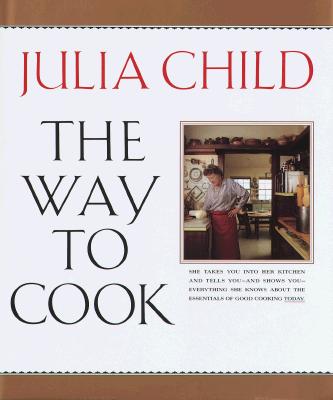 In her most creative and instructive cookbook, Julia Child distills a lifetime of cooking into 800 recipes emphasizing lightness, freshness, and simplicity. Chapters are structured around master recipes, followed by innumerable variations that are easily made once the basics are understood. For example, make Julia's simple but impeccably prepared saute of chicken, and before long you're easily whipping up Chicken with Mushrooms and Cream, Chicken Provencale, Chicken Piperade, or Chicken Marengo. Or master her perfect broiled butterflied chicken, and you'll soon be including Deviled Rabbit or Split Cornish Game Hens Broiled with Cheese on your menu. Here home cooks will find a treasure trove of poultry and fish recipes, as well as a vast array of fresh vegetables prepared in new ways, along with bread doughs and delicious indulgences, such as Caramel Apple Mountain or a Queen of Sheba Chocolate Almond Cake with Chocolate Leaves. And if you want to know how a finished dish should look or how to angle your knife or to fashion a pretty rosette on a cake, there are more than 600 color photographs to entice and instruct you along the way. A brilliant, inspiring, one-of-a-kind, book from the incomparable Julia Child, The Way to Cook is a testament to the satisfactions of good home cooking.

Julia Child was born in Pasadena, California. She graduated from Smith College and worked for the OSS during World War II; afterward she lived in Paris, studied at the Cordon Bleu, and taught cooking with Simone Beck and Louisette Bertholle, with whom she wrote the first volume of Mastering the Art of French Cooking (1961). In 1963, Boston's WGBH launched The French Chef television series, which made Julia Child a national celebrity, earning her the Peabody Award in 1965 and an Emmy in 1966. Several public television shows and numerous cookbooks followed. She died in 2004.

This feature require that you enable JavaScript in your browser.
END_OF_DOCUMENT_TOKEN_TO_BE_REPLACED

This feature require that you enable JavaScript in your browser.
END_OF_DOCUMENT_TOKEN_TO_BE_REPLACED

This feature require that you enable JavaScript in your browser.
END_OF_DOCUMENT_TOKEN_TO_BE_REPLACED