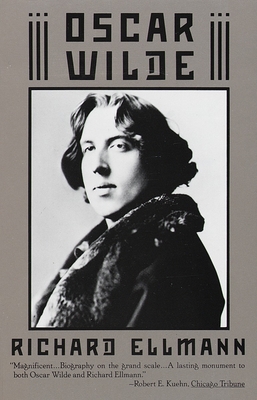 Winner of both the National Book Critics Circle Award and the Pulitzer Prize, Oscar Wilde is the definitive biography of the tortured poet and playwright and the last book by renowned biographer and literary critic Richard Ellmann. Ellmann dedicated two decades to the research and writing of this biography, resulting in a complex and richly detailed portrait of Oscar Wilde. Ellman captures the wit, creativity, and charm of the psychologically and sexually complicated writer, as well as the darker aspects of his personality and life. Covering everything from Wilde's rise as a young literary talent to his eventual imprisonment and death in exile with exquisite detail, Ellmann's fascinating account of Wilde's life and work is a resounding triumph.

Richard Ellmann, during a long and distinguished career, won international recognition as a scholar, teacher of English literature, critic, and biographer. His magesterial life of James Joyce has been widely acclaimed as the greatest literary biography of the century.
Ellmann was born in Highland Park, Michigan, in 1918. He studied at Yale and at Trinity College in Dublin. He taught at Harvard, Yale, Northwestern, Emory, the University of Chicago, Indiana University, and Oxford, where he was Goldsmiths' Professor of English Literature and Fellow of New College.
His James Joyce (National Book Award, 1959) was preceded by Yeats: The Man and the Masks and The Identity of Yeats, and was followed by—among other greatly praised books—two volumes of Joyce letters, Eminent Domain, and Four Dubliners.
Ellmann died in May 1987, in Oxford, soon after completing Oscar Wilde, to which he had devoted some two decades of study, research, and writing.

This feature require that you enable JavaScript in your browser.
END_OF_DOCUMENT_TOKEN_TO_BE_REPLACED

This feature require that you enable JavaScript in your browser.
END_OF_DOCUMENT_TOKEN_TO_BE_REPLACED

This feature require that you enable JavaScript in your browser.
END_OF_DOCUMENT_TOKEN_TO_BE_REPLACED