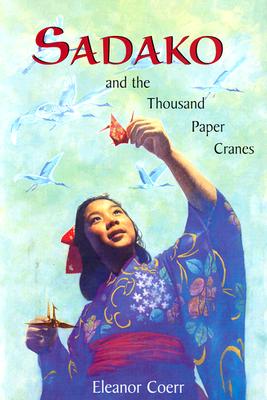 Sadako and the Thousand Paper Cranes: 25th Anniversary EditionDESCRIPTION: For twenty-five years, middle-grade readers have been moved by this telling of Sadako Sasaki's spirited battle with leukemia. She was two-years-old when the atom bomb was dropped on Hiroshima at the end of World War II, and dizzy spells began when she was twelve. She faced the disease with an irrepressible spirit and focused her energy (and that of everyone who knew her) on folding 1000 paper cranes, which Japanese legend held would prompt the gods to make her well again. Eleanor Coerr crafted this story of Sadako's twelfth year after reading the book of her letters her classmates compiled after her death. This special edition contains a bio of Eleanor Coerr with details about her work on this book and instructions for folding paper cranes. "An extraordinary book, one no reader will fail to find compelling and unforgettable." (Booklist, starred review) "The story speaks directly to young readers of the tragedy of Sadako's death and, in its simplicity, makes a universal statement for 'peace in the world.'" (The Horn Book)

Eleanor Coerr was born in Kamsack, Saskatchewan, Canada, and grew up in Saskatoon. Two of her favorite childhood hobbies were reading and making up stories.Her fascination with Japan began when she received a book called Little Pictures of Japan one Christmas. It showed children in beautiful kimonos playing games, chasing butterflies, and catching crickets. She pored over the colored illustrations, dreaming of one day joining those children in Japan. Her best friend in high school was a Japanese girl whose family introduced her to brush painting, eating with chopsticks, and origami. Eleanor's desire to visit that magical place never faded, and her well-thumbed copy of that favorite book is still in her library.Eleanor began her professional life as a newspaper reporter and editor of a column for children. Luckily, she traveled to Japan in 1949 as a writer for the Ottawa Journal, since none of the other staff wanted to go to a country that had been devastated by war. To learn Japanese, Eleanor lived on a farm near Yonago for about one year, absorbing the culture and enjoying rural celebrations. Soon she was able to visit nearby schools and speak to young audiences about her country. Eleanor wrote and illustrated Circus Day in Japan, using the farm family and a visit to the circus as models. It was published in Tokyo in 1953.Her most difficult trip while she was in Japan was to Hiroshima. Eleanor was shocked by the horrible destruction and death caused by one atom bomb. Of course, she did not know Sadako Sasaki at that time, although she was living there with her family. The misery and suffering Eleanor witnessed was burned into her mind, and she hoped future world leaders would avoid wars at all costs.One beautiful day in 1963, Eleanor revisited Hiroshima and saw the statue of Sadako in the Hiroshima Peace Park. Impressed by the stories she heard about Sadako's talent for running, courage when faced with cancer, and determination to fold one thousand paper cranes, Eleanor was inspired to find a copy of Kokeshi, Sadako's autobiography.Eleanor looked everywhere she could think of and asked all of her Japanese friends to help. Since the school had copied the ninety-four pages and stapled them together, most of the books had fallen apart. Years passed, and Eleanor continued writing for newspapers in various countries and wrote more children's books. But she was always hoping to find Kokeshi.One fateful afternoon, Eleanor was having tea with a missionary who had lived in Hiroshima all through the war."Eleanor," she said, "you should write a biography of Sadako Sasaki for American children to read.""I would love to," said Eleanor, "but I must have Kokeshi to get all the true facts about Sadako."The missionary took Eleanor to her attic. Lo and behold, at the bottom of an old trunk was an original copy of Kokeshi. Eleanor rushed to have it translated properly and began writing Sadako and the Thousand Paper Cranes as soon as she could."It's like magic. I was meant to write her story," Eleanor said.Sadako and the Thousand Paper Cranes has been translated into many languages and has moved both children and adults to write plays, perform ballets, compose songs, and collect money for peace statues-all celebrating Sadako and her wish for peace. Eleanor has visited schools all around the world encouraging her audiences to work for a nonviolent world. Folded cranes are everywhere, and always underneath the statue of Sadako in Hiroshima's Peace Park.

This feature require that you enable JavaScript in your browser.
END_OF_DOCUMENT_TOKEN_TO_BE_REPLACED

This feature require that you enable JavaScript in your browser.
END_OF_DOCUMENT_TOKEN_TO_BE_REPLACED

This feature require that you enable JavaScript in your browser.
END_OF_DOCUMENT_TOKEN_TO_BE_REPLACED