Up a Road Slowly (DIGEST) (Paperback) 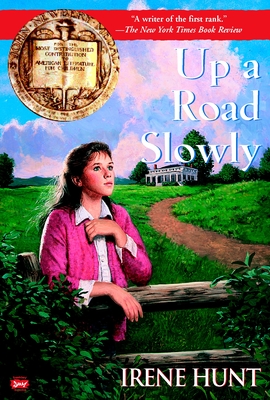 The beloved author of Across Five Aprils and No Promises in the Wind presents one of her most cherished novels, the Newbery Award-winning story of a young girl’s coming of age…

Julie would remember her happy days at Aunt Cordelia’s forever. Running through the spacious rooms, singing on rainy nights in front of the fireplace. There were the rides in the woods on Peter the Great, and the races with Danny Trevort. There were the precious moments alone in her room at night, gazing at the sea of stars.

But there were sad times too—the painful jealousy Julie felt after her sister married, the tragic death of a schoolmate and the bitter disappointment of her first love. Julie was having a hard time believing life was fair. But Julie would have to be fair to herself before she could even think about new beginnings...

“Hunt demonstrates that she is a writer of the first rank...Those who follow Julie's growth—from a tantrum-throwing seven-year-old to a gracious young woman of seventeen—will find this book has added a new dimension to their lives.”—The New York Times Book Review

Praise for the Novels of Irene Hunt

“An intriguing and beautifully written book, a prize to those who take the time to read it, whatever their ages.”—The New York Times

“This is a beautifully written book, filled with bloodshed, hate, and tears, but also with love, loyalty, and compassion, with unforgettable characters, and with ideas and implications that have meaning for young people today.”—Chicago Tribune

This feature require that you enable JavaScript in your browser.
END_OF_DOCUMENT_TOKEN_TO_BE_REPLACED

This feature require that you enable JavaScript in your browser.
END_OF_DOCUMENT_TOKEN_TO_BE_REPLACED

This feature require that you enable JavaScript in your browser.
END_OF_DOCUMENT_TOKEN_TO_BE_REPLACED