Macarthur's War: The Flawed Genius Who Challenged The American (Paperback) 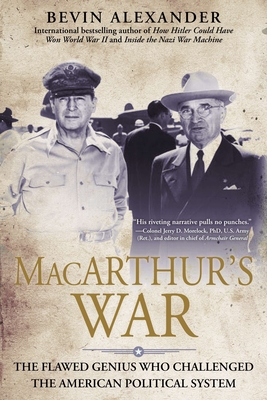 By Bevin Alexander
$16.00
Special Order - may be out of print

General Douglas MacArthur was highly skilled and world famous as a military commander. Under his leadership after World War II, Japan was rebuilt into a democratic ally. But during the Korean War, in defiance of President Harry S. Truman and the Joint Chiefs of Staff, he pushed for an aggressive confrontation with Communist China—a position intended to provoke a wider war, regardless of the consequences.

While MacArthur aspired to stamp out Communism across the globe, Truman was much more concerned with containing the Soviet Union. The infamous clash between them was not only an epic turning point in history, but the ultimate struggle between civil and military power in the United States. While other U.S. generals have challenged presidential authority, no other military leader has ever so brazenly attempted to dictate national policy.

In MacArthur’s War, Bevin Alexander details MacArthur’s battles, from the alliances he made with Republican leaders to the threatening ultimatum he delivered to China against orders—the action that led directly to his downfall.

Bevin Alexander has published numerous works of military history, including the international bestseller How Hitler Could Have Won World War II. With honor degrees from The Citadel and Northwestern University, Alexander was awarded the Commendation Medal for his service as a combat historian in the Korean War, where he also won three battle stars for action at the front. He has appeared often on the History, Discovery, and Military channels. He has provided testimony before the House Committee on International Relations, advised the Rand Corporation on military strategy, and taken part in a war game at the Army War College.

“A stirring and insightful account of General Douglas MacArthur’s controversial role in the Korean War that culminated . . . in one of the most dramatic incidents in American military history.”—Carlo D’Este, author of Patton: A Genius for War

“Bevin Alexander’s MacArthur’s War is a superbly written, blow-by-blow account of the most controversial civil-military clash in American history. His riveting narrative pulls no punches as it reveals how the feisty U.S. president confronted America’s most revered military hero against the backdrop of brutal Korean War combat.”—Colonel Jerry D. Morelock, PhD, U.S. Army (Ret.), and editor in chief of Armchair General

“Alexander’s hard-hitting narrative captures in vivid detail the elements of that contest, as well as the chain of significant events that produced it . . . MacArthur’s War is a valuable account of a chapter in the Cold War that we must never forget.”—Harry J. Middleton, founding director of the Lyndon B. Johnson Presidential Library at the University of Texas, and author of LBJ: The White House Years

This feature require that you enable JavaScript in your browser.
END_OF_DOCUMENT_TOKEN_TO_BE_REPLACED

This feature require that you enable JavaScript in your browser.
END_OF_DOCUMENT_TOKEN_TO_BE_REPLACED

This feature require that you enable JavaScript in your browser.
END_OF_DOCUMENT_TOKEN_TO_BE_REPLACED