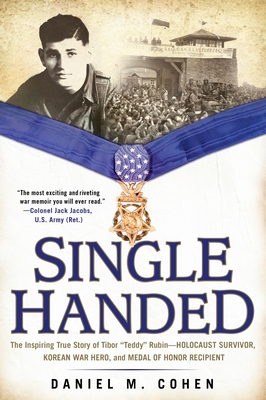 From a World War II concentration camp to the Korean War to the White House, this is the story of Tibor “Teddy” Rubin, the only Holocaust survivor ever to receive a Medal of Honor...

After being captured by Nazis and living through a year in the Mauthausen concentration camp, young Hungarian immigrant Tibor Rubin arrived in America, penniless and barely speaking English. In 1950, he volunteered for service in the Korean War. After numerous acts of heroism, including single-handedly defending a hill against enemy soldiers, rescuing a wounded comrade amid sniper fire, and commandeering a machine gun, he was captured and spent two and a half years in captivity.

Still, it wasn’t until 2005, when Tibor was seventy-six, that he received the Medal of Honor from President George W. Bush—making the former Hungarian refugee the only Holocaust survivor to earn America’s highest military distinction.

Drawing on eyewitness accounts and extensive interviews, Single-Handed is the inspiring account of the life of Tibor “Teddy” Rubin, a stirring portrait of a true American hero.

Daniel M. Cohen has worked as a filmmaker, journalist, and film critic for more than thirty years. He has written and directed award-winning independent features and continues to work as a film critic. He lives in Santa Monica, California.

“This is the most exciting and riveting war memoir you will ever read.”—Colonel Jack Jacobs, U.S. Army (Ret.)

“Daniel Cohen has captured the essence of unblemished character and raw courage...demonstrating that heroism outlasts prejudice.”—Colonel Cole C. Kingseed, coauthor of Beyond Band of Brothers and author of Conversations with Major Dick Winters

“A real page-turner.”—Larry Alexander, national bestselling author of Biggest Brother and coauthor of A Higher Call

“A story of endurance, bravery and determination that rivals that of Louis Zamperini, the hero of Laura Hillenbrand’s Unbroken…Readers cannot help but be inspired.”—The Associated Press

This feature require that you enable JavaScript in your browser.
END_OF_DOCUMENT_TOKEN_TO_BE_REPLACED

This feature require that you enable JavaScript in your browser.
END_OF_DOCUMENT_TOKEN_TO_BE_REPLACED

This feature require that you enable JavaScript in your browser.
END_OF_DOCUMENT_TOKEN_TO_BE_REPLACED