Verdun: The Lost History of the Most Important Battle of World War I, 1914-1918 (Hardcover) 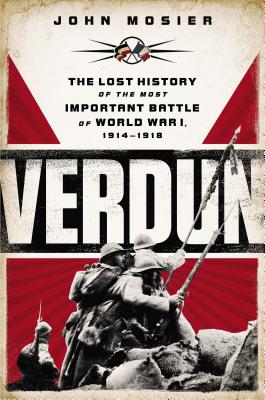 Alongside Waterloo and Gettysburg, the Battle of Verdun during the First World War stands as one of history's greatest clashes. Yet it is also one of the most complex and misunderstood, in a war only imperfectly grasped.
Conventional wisdom holds that the battle began in February 1916 and lasted until December, when the victorious French wrested all the territory they had lost back from the Germans. In fact, says historian John Mosier, from the very beginning of the war until the armistice in 1918, no fewer than eight distinct battles were waged for the possession of Verdun. These conflicts are largely unknown, even in France, owing to the obsessive secrecy of the French high command and its energetic propaganda campaign to fool the world into thinking that the war on the Western Front was a steady series of German checks and defeats.
Although British historians have always seen Verdun as a one-year battle designed by the German chief of staff to bleed France white, Mosier's careful analysis of the German plans reveals a much more abstract and theoretical approach.
Our understanding of Verdun has long been mired in myths, false assumptions, propaganda, and distortions. Now, using numerous accounts of military analysts, serving officers, and eyewitnesses, including French sources that have never been translated, Mosier offers a compelling reassessment of the Great War's most important battle.

John Mosier, who earned his PhD at Tulane University, is a professor at Loyola University in New Orleans, where he teaches courses in film, modern European literature, and the eighteenth-century novel. His books on the World Wars, including "The Myth of the Great War "and "Hitler vs. Stalin," have given him a reputation as a leading revisionist historian.

“Mr. Mosier [is] one of the more entertainingly contrarian military historians writing today...An important and groundbreaking book about the Eastern front.”—The Washington Times on Hitler vs. Stalin

“The author knows his military history, strategy, and tactics…packed with evidence, much of it ingeniously obtained and argued.” —The Washington Post on The Myth of the Great War

“This provocative book tosses military-history hand grenades on almost every page, challenging just about every generally held notion about World War II.”—Forbes on The Blitzkrieg Myth

“A dramatic departure from the conventional wisdom…a dramatic chronicle of the most brutal theater in the most brutal war in one of history’s most brutal centuries...This is a clear-eyed, compelling description of a battle that has been described many times, but seldom with such an ironic eye.”—The Boston Globe on Hitler vs. Stalin

“There is much in the work I really admire, not least its brilliant recasting of the traditional military narrative.”—Niall Ferguson on The Myth of the Great War

This feature require that you enable JavaScript in your browser.
END_OF_DOCUMENT_TOKEN_TO_BE_REPLACED

This feature require that you enable JavaScript in your browser.
END_OF_DOCUMENT_TOKEN_TO_BE_REPLACED

This feature require that you enable JavaScript in your browser.
END_OF_DOCUMENT_TOKEN_TO_BE_REPLACED