The House of Hawthorne (Hardcover) 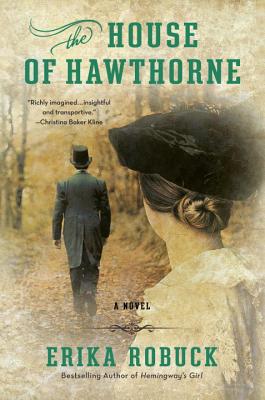 From Erika Robuck, bestselling author of Hemingway's Girl, comes a brilliant new novel about a literary couple. The unlikely marriage between Nathaniel Hawthorne, the celebrated novelist, and Sophia Peabody, the invalid artist, was a true union of passion and intellect.... Beset by crippling headaches from a young age and endowed with a talent for drawing, Sophia is discouraged by her well-known New England family from pursuing a woman's traditional roles. But from their first meeting, Nathaniel and Sophia begin an intense romantic relationship that despite many setbacks leads to their marriage. Together, they will cross continents, raise children, and experience all the beauty and tragedy of an exceptional partnership. Sophia's vivid journals and her masterful paintings kindle a fire in Nathaniel, inspiring his writing. But their children's needs and the death of loved ones steal Sophia's energy and time for her art, fueling in her a perennial tug-of-war between fulfilling her domestic duties and pursuing her own desires. Spanning the years from the 1830s to the Civil War, and moving from Massachusetts to England, Portugal, and Italy, The House of Hawthorne explores the tension within a famous marriage of two soulful, strong-willed people, each devoted to the other but also driven by a powerful need to explore the far reaches of their creative impulses. It is the story of a forgotten woman in history, who inspired one of the greatest writers of American literature...

Erika Robuck is the national bestselling author of The House of Hawthorne, Fallen Beauty, Call Me Zelda, Hemingway's Girl, and Receive Me Falling. She is a contributor to the fiction blog Writer Unboxed, and she maintains her own blog, Muse. She is a member of the Hawthorne Society, the Hemingway Society, the Historical Novel Society, and the Edna St. Vincent Millay Society. She lives in Annapolis, Maryland, with her husband and three sons.

This feature require that you enable JavaScript in your browser.
END_OF_DOCUMENT_TOKEN_TO_BE_REPLACED

This feature require that you enable JavaScript in your browser.
END_OF_DOCUMENT_TOKEN_TO_BE_REPLACED

This feature require that you enable JavaScript in your browser.
END_OF_DOCUMENT_TOKEN_TO_BE_REPLACED