The Myth of the Strong Leader: Political Leadership in the Modern Age (Hardcover) 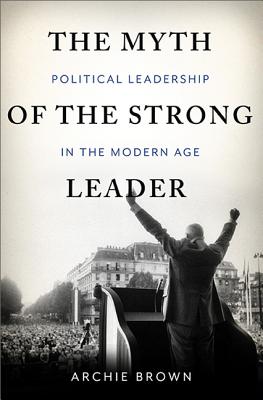 From one of the world's preeminent political historians, a magisterial study of political leadership around the world from the advent of parliamentary democracy to the age of Obama.

All too frequently, leadership is reduced to a simple dichotomy: the strong versus the weak. Yet, there are myriad ways to exercise effective political leadership -- as well as different ways to fail. We blame our leaders for economic downfalls and praise them for vital social reforms, but rarely do we question what makes some leaders successful while others falter. In this magisterial and wide-ranging survey of political leadership over the past hundred years, renowned Oxford politics professor Archie Brown challenges the widespread belief that strong leaders -- meaning those who dominate their colleagues and the policy-making process -- are the most successful and admirable.

In reality, only a minority of political leaders will truly make a lasting difference. Though we tend to dismiss more collegial styles of leadership as weak, it is often the most cooperative leaders who have the greatest impact. Drawing on extensive research and decades of political analysis and experience, Brown illuminates the achievements, failures and foibles of a broad array of twentieth century politicians. Whether speaking of redefining leaders like Franklin Delano Roosevelt, Lyndon Johnson, and Margaret Thatcher, who expanded the limits of what was politically possible during their time in power, or the even rarer transformational leaders who played a decisive role in bringing about systemic change -- Charles de Gaulle, Mikhail Gorbachev and Nelson Mandela, among them -- Brown challenges our commonly held beliefs about political efficacy and strength.

Overturning many of our assumptions about the twentieth century's most important figures, Brown's conclusions are both original and enlightening. The Myth of the Strong Leader compels us to reassess the leaders who have shaped our world - and to reconsider how we should choose and evaluate those who will lead us into the future.

Brown is considered one of the foremost experts in Soviet and Communist politics, the Cold War, and political leadership, and has advised several political leaders, including Margaret Thatcher on the eve of Gorbachev's first visit to Britain. The author or editor of over eighteen books, including The Gorbachev Factor and The Rise and Fall of Communism -- both winners of the W.J.M. Mackenzie Prize for best political science book of the year -- Brown lives in Oxford.

"...an important and unusual read ... Brown does a wonderful job of showing how the same qualities that can seem so appealing in strong leaders can lead, in the mildest cases, to bad decision-- and, in the most extreme cases, to death and suffering on a massive scale ... Though The Myth of the Strong Leader is about political leadership, you come away from Brown's book with a deeper understanding of leadership in general."—Bill Gates' Favorite Books of 2016

"Counter-intuitive but splendidly argued ... This is an ambitious work made more compelling by its breadth."—Washington Post

"It is a pleasure to find a book on political leadership that imposes no theories or models but studies actual political leaders, dozens of them from many countries, in a historical survey from the beginning of the 20th century."—Wall Street Journal

"A rich description of different varieties of political leadership in diverse cultures. It is hard to imagine a better guide than Brown, who has lived and worked in the UK, US and Russia, and is both an outstanding political scholar and an elegant, witty writer."—Guardian (UK)

"Impressive in scope and sophistication, Brown offers a model of leadership that is both strong and purpose driven."—Choice

"A sure-handed historical review with an engaging viewpoint."—Kirkus

"Brown raises important questions about the nature of leadership and the expectations we have for our leaders."—Booklist

This feature require that you enable JavaScript in your browser.
END_OF_DOCUMENT_TOKEN_TO_BE_REPLACED

This feature require that you enable JavaScript in your browser.
END_OF_DOCUMENT_TOKEN_TO_BE_REPLACED

This feature require that you enable JavaScript in your browser.
END_OF_DOCUMENT_TOKEN_TO_BE_REPLACED