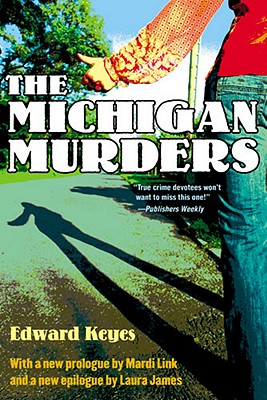 "Very engrossing . . . in the finest you can't put it down tradition."
---Hartford Courant

"This factual account of each murder, through the conviction of the killer, has all the excitement of a first-rate work of fiction, and is told straight, without the usual sociological jargon. Keyes collaborated with Robin Moore on The French Connection; The Michigan Murders is his first solo effort, and it is a good one."
---Miami Herald

The true story of the savage coed killings---by the boy who could have lived next door!

Southeastern Michigan was rocked in the late 1960s by the terrifying serial murders of young women, whose bodies were dumped in Ann Arbor and Ypsilanti. In each case, few clues were left at the scene, and six separate police agencies were unable to end the horror. Then, almost by accident, a break came. The suspect: John Norman Collins, a young, quiet, all-American boy.

Collins was caught, went to trial, and, on August 19, 1970, was found guilty and sentenced to life imprisonment with no possibility of parole. He is now in his sixties and is serving his sentence in Marquette, Michigan.

Collins was one of the first serial killers exposed in the region, and his crimes had many in the area locking their doors for the first time. Edward Keyes's harrowing The Michigan Murders covers every step of the case. It fell out of print for more than a decade before being revived for this special edition.

Mardi Link, author of the new prologue, is the author of two regionally best-selling true crime books based in northern Michigan, When Evil Came to Good Hart and Isadore's Secret.

Laura James, author of the new epilogue, is a trial lawyer, crime historian, and true crime author who blogs about the true crime genre at her Web site CLEWS (www.laurajames.com).

Edward Keyes, now deceased, spent several years in the early 1970s investigating the Michigan murders. He also authored the works Double Dare and Cocoanut Grove. The Michigan Murders was a finalist for the Edgar Allan Poe Award for Best Fact Crime in 1977.

This feature require that you enable JavaScript in your browser.
END_OF_DOCUMENT_TOKEN_TO_BE_REPLACED

This feature require that you enable JavaScript in your browser.
END_OF_DOCUMENT_TOKEN_TO_BE_REPLACED

This feature require that you enable JavaScript in your browser.
END_OF_DOCUMENT_TOKEN_TO_BE_REPLACED